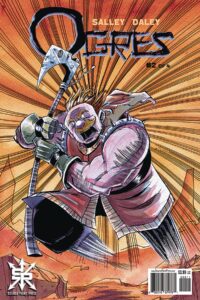 When we last left off with things in the Ogre-Verse, things weren’t going so well as we were given witness to how things were going for other characters in the Ogre-Verse as war and death swept across the land with inevitable change in its wake. Whether or not that’s change for the better is still up in the air and Bob and Shawn are keeping that close to their chests. And as we see in issue 2 of Ogres, things are still not all that great. Especially as one of our main casters (Cron) and his fellow captives are forced to hear the ramblings of a religious nut before he does some unfortunate crap to two of them. Though one could argue its a mercy considering Cron and the fellow captives have to hear his bunch of BS.

(See here for past coverage of the first Ogres issue and the story before it.)

And while that’s going on, we’ve got the rest of our main cast trying to come up with a plan to save Cron while dealing with group strife at the same time!

Something that’s entirely believable for that matter considering the tensions of everything going on and how two characters come to join the Ogres. Making for trust issues and wanting to save one’s own neck instead of being involved. Which… Unfortunately seems to be easier said than done with that last bit for the Dwarf! We also see more of the Taesh’aar group and some of what they are up too and while I get not wanting to be wiped out, the way the leader is handling things is certainly not the best way to go about it in any way. And its clear their Prince is quite possibly of the same kind of thinking judging by his words and facial expressions.

Should the leader of the Taesh’aar group end up surviving this whole nasty affair the North is causing, and isn’t a slave, the guilt is going to be something she’s not going to be able to avoid. Its gonna be massive and crippling for her to deal with.

Religious fanatics, whether or not they truly believe, and going 100 percent into the whole thing as they commit horrible acts in the name of their God, are the absolute worst types to deal with. And that’s something Bob and Shawn are showing quite well in this second issue of Ogres. This guy is someone I’d love to personally beat the crap out of as he deserves a strong beating or two. He’s also not someone I’d want to encounter in a lone alleyway either for that matter unless I had prior knowledge of his being there and could get the drop on him and make it out alive. Him or his buddy with the big ass sword!

I know that once I reached the end of this issue, I couldn’t help but let out a loud expletive with a wide eyed expression as I hadn’t been expecting it to happen. But with the events of this issue and its ending, its clear to see that perhaps the frying pan is even far more worse than what the fire is! Here’s to hoping Tugho’s (possibly) improving aim aids our main crew in a very big way in the near future!

Ogres #2 is out today in stores so be sure to grab your copy today when you visit your local comic shop! Its a definite not miss!

Summary: With Cron about to be sacrificed by the Dragon Cleric and his monks, the others struggle to agree on a rescue plan. The Ogres and their new friend, Rett the dwarf, are caught between the angry savages who have followed them from the badlands and the civilized people who want to see them destroyed. Meanwhile, the Taesh’aar continue to wreck havoc upon the fantastical creatures of the land.