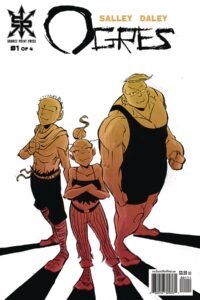 Well, I have to say I do believe I got my wish in getting more of the Ogre ‘Verse from Bob Salley and Shawn Daley. This time in the form of the first issue of Ogres and within the first few pages alone, you find yourself getting punched right in the gut of feelings. And there is a strong part of me that hopes ‘Mother’ gets some Karma handed to her for the horrible way she’s handling things. If you’ve read this already, you know what I’m talking about and if you haven’t yet, you will once you do. Kudos to Bob for successfully causing strong feelings to stir with his writing and to Shawn as well for capturing all that so well with his art. Art and colors that I am glad to see are in this continuation of the Ogre ‘Verse for that matter. Although, I kinda have to wonder if this takes place after the events of the first story or if it takes place during the first story.

Since there’s a scene here that has me wondering on that and if its the second thing, its a heck of a way to interweave both stories without much conflicting. While the first story kind of had a focus on war and the ugliness of it, Ogres seems to be focusing more on the ugliness of what one is willing to do to survive when another force begins to make inroads. Said force of course being Man and their need for land and resources. Some may not think rationally and that can lead to problems while others are able to think rationally and may or may not avoid problems because of that. How this will play out for Tugho the Ogre (one of the new characters we meet in the first issue) and a couple of others (such as Cron and Meika) remains to be seen. Especially as Tugho himself seems a bit… Special, to put it kindly. But definitely has his own smarts as well and is pretty much already a favorite of mine.

Though I expect to end up heartbroken where he’s concerned but hopefully that expectation will prove to be quite wrong! How a potential ally will work out, along with the trouble Cron seems to be in by the end of this issue, are things I look forward to seeing when the time comes as our new crew deals with whatever comes their way in their search for payback. And if you haven’t yet, I highly recommend you go to your nearest LCS and pre-order Ogres #1 (Order Code: Sep191977) and subscribe to the 4 issue mini-series as a whole. Doing so will help out Bob, Shawn, and Source Point Press a great deal, along with over all supporting the Indies! Ogres #1 is also out on November 27th, 2019!

Summary: After a band of marauders called the Taesh’aar destroy their village, a group of young ogres hire an exiled dwarf to help track down these creatures and avenge their kind. The bickering crew is not alone as the dwarf has a prisoner of his own and a horde of savages hunting him down. Bob Salley and Shawn Daley bring us back into their fantasy world and show us the human condition in the harshness of decaying times for all mystical creatures.