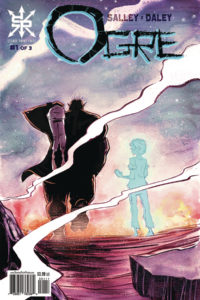 There’s been quite a bit of hype where Bob Salley and Source Point Press’ latest offering of ‘Ogre‘ is concerned. And after having read the three issues myself, I’d say its well deserved as its a really well done story. One that could even bring a reader to shed a tear or two over thanks to it causing a gut punch to the feels. Shawn Daley does a great job of capturing everything with his art and I think even doing a nice little homage to Swamp Thing (I could of course be wrong) at one point too. The fact the battle scenes aren’t overly violent and bloody (aside from issue 3 at one point) is a nice thing to see in the pages of these three issues. Showing that you don’t always need to show a lot of blood and gore during battle scenes. ‘Ogre‘ is essentially about the ugliness of war (to me at least) and how sometimes it can even create unusual alliances with people you wouldn’t normally consider doing.

Especially if they are from another race like the titular character simply known as Ogre. Who’s stuck with a bunch of humans, to the point a dead one’s chained to him and the ghost of that dead man has chosen to keep him company in a cell. And is perhaps the most kindest to him out of all the characters aside from Mishon. I guess death definitely and truly does change your perspective on things unless our friendly ghost never had an issue with Ogres when he was alive. To be honest, I’m a little surprised this is only 3 issues long but regardless of that, 3 issues does what it needs to in order to tell the story that Bob and Shawn want to tell. Though I certainly wouldn’t complain if Bob and Shawn chose to do more with this particular universe of theirs. 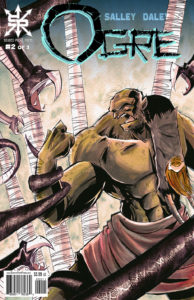 War is an ugly thing, no matter how one might try to spin it. It can change a person and put a person through all sorts of Hell no matter what race they are, be it Human, Ogre, Troll, and whatever else. ‘Ogre‘ is a damn good example of all that and I think certain individuals in this story may have a better understanding of Ogre himself after all this. Or at least are willing enough to leave him and his kind alone after the story’s events. If you haven’t read this yet, you are sorely missing out as I could go on about this book but it would risk spoiling things and I don’t want to do that. As this kind of story is meant to be in front of eyes and its content being devoured quickly by eager readers. 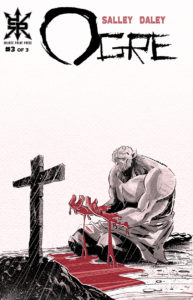 Editor’s Note: Chances are, you may be able to find a copy of ‘Ogre‘ at your local comic shop or a convention that Source Point Press is in attendance for, but if not, head to the Source Point Press website to try and grab yourself a copy!

Summary: Issue 1 of the 3-issue miniseries! A reclusive beast sits locked in a castle prison cell with the ghost of the corpse he is chained to. And now he must decide if he’ll join in on an escape plan that could set him on an adventure he’s not prepared to embark upon.