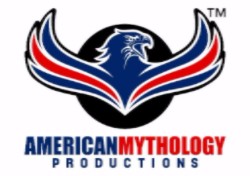 American Mythology Finds Itself in Another Fine Mess with Launch of New Laurel & Hardy Comic! 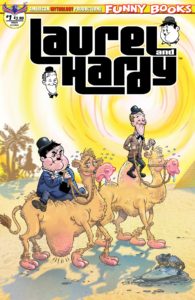 [Baltimore, Maryland] – There are few names in the history of comedy which have stood the test of time. Acts who transcend age and bring laughter to generations like few have before or after them. They have been recognized as a template for modern humor and celebrated by today’s most popular funnymen and women alike. Stan Laurel and Oliver Hardy were the pinnacle of comedic genius for their time.

Now, American Mythology Comics, the same company who brought The Three Stooges back into the comics’ spotlight, is bringing Laurel & Hardy’s beloved slapstick shenanigans back to their legion of fans with the release of a new comic book in April of 2019! The comic book publisher plans to both celebrate and pay tribute to Stan and Ollie’s legacy by bringing new stories to fans with the upcoming series, and also by reprinting some of their frantic follies from years past.

Art for the new series will be created by veteran comic artist, Jorge Pacheco (Rocky & Bullwinkle, Pink Panther, Looney Tunes). Pacheco is well-versed with illustrating the comedy duo, having already done so over thirty years ago when Stan and Ollie last saw the paneled pages of comics. The stories for the premiere issue will be provided by novelist and comic writer, S.A. Check (The Three Stooges, Casper, Legend Gary), and multi-media writer, Jordan Gershowitz (Tom and Jerry, Danger Mouse, Sesame Street). Both new stories will center on honoring the tone and feel of the original skits made famous by the comedians.

“Sometimes you just get lucky,” said book artist Pacheco. “My step father brought a comic book home for me. It was a monster book with art by Jack Kirby & Steve Ditko. How was I supposed to know, my first exposure to comics was drawn by probably the two greatest comic book artists ever? Then, one day, I was channel surfing on TV when I came across this “chubby guy & his goofy friend”. I watched it and was immediately hooked. Little did I know, I was watching the greatest comedic duo ever, Laurel & Hardy. Again, I got lucky. So, throughout childhood, I read comics, watched monster shows & the great Laurel & Hardy movies on a mini movie projector my mother had bought me until the films were nothing but tatters. Recently, my good friends at American Mythology asked if I’d like to be an artist on a new project for the publisher. I was excited & asked what book? He said Laurel & Hardy. Sometimes, luck is a wonderful thing. I hope you all enjoy the comedic duo’s antics half as much as I’ve enjoyed bringing L&H to life in these comic pages!”

“It’s a rare occasion for a writer to contribute in celebrating two comedic geniuses like Stan Laurel and Oliver Hardy,” said book writer S.A. Check. “When I learned American Mythology had a shot at working with Larry Harmon Pictures to bring the comedy of these two larger than life icons back to fans, I was the first in line to have a shot at working on the book. One of my favorite parts of the process has been delving back into the skits and movies and numerous articles written about the comedians, and remembering why so many fans continue to hold their work in such high regard. I’m very proud of my work on the project, and I only hope I managed to bring a fraction of the magic they shared on the stage and screen back to fans.”

Laurel and Hardy were a comedy act known best during the early Classical Hollywood era of American cinema. The team was composed of Stan Laurel, an Englishman, and Oliver Hardy, an American. The duo appeared as a team in 107 films between 1927 and 1950. The official Laurel and Hardy appreciation society is known as “The Sons of the Desert”, named after a fictional fraternal society in their 1933 film of the same name.

Laurel & Hardy #1, will be solicited in Diamond Comic Distributors’ February 2019 Previews catalog, the premier source of merchandise for the comic book specialty market, and slated for release in April 2019. Comic book fans are encouraged to reserve copies with their local comic book retailers.

ABOUT LARRY HARMON PICTURES:
Larry Harmon Pictures Corporation is the owner and exclusive Licensor of the internationally recognized characters, LAUREL & HARDY and BOZO, and has licensed them for more than 60 years for use in television, film, advertising campaigns, promotional opportunities, live appearances and on many hundreds of products around the world.