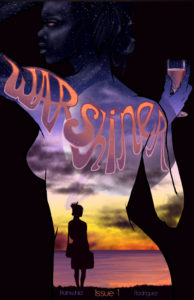 “It’s prohibition in space.” That is how Rebecca Rothschild writer of Warshiner pitched me her passion project at a small comic con outside of Chicago. Based on the premise alone I was in for two issues. I automatically envisioned a 1920s aesthetic, gangsters, G-Men, and flappers but that was not what was delivered. No, Rebecca creates an original universe where every planet seems to have its own particular flavor without being dependent on the traditional tropes you’d expect in a book about bootlegging alcohol. There isn’t much back story given other than that in the future Earth produced alcohol is highly sought after across a galaxy and our main protagonist just so happens to be an expect in its production.

Issue one introduces us to Ambrose, our middle-aged heroine on the run from a still mysterious threat. She is polite, smart, and you can see how her trusting nature is both admirable and a liability. Where you’d expect to see backstory forced in, the plot is more urbane as characters’ motivations are established early and with a light touch. Ambrose is soon in business with the Queen and on the radar of malicious forces across the galaxy. As an introduction to the world the scope is small but focuses on the right area to leave you curious enough to continue into the second issue.

As far as artwork is concerned you can tell where the artist’s focus was. Rodriguez character work is great and her design of various creatures is innovative. Her ink work is solid and the coloring is top notch for an indie book. However her backgrounds leave room for improvement, as the quality of the backgrounds is not consistent from panel to panel. But for a first issue the panel work has a good flow that progresses the action of each page. Overall for a small print indie book Rothschild and Rodriguez deliver an enticing premise with a unique vision. So if you see the Warshiner series for sale at a con near you definitely pick it up and know that it’s much more than prohibition in space. 8/10