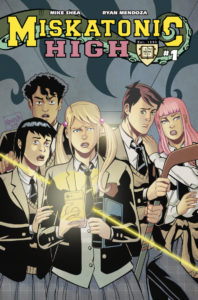 High School is hard enough as it is, more so if you’re someone other kids like to pick on for whatever reason. But thrown in Lovecraftian monsters, sacrificial rituals, and rat people? Its a miracle if you even get out of bed! It makes you question which one you would prefer more for possibly an hour or two until something (hunger maybe) gets you to stop thinking about it for awhile. And for the five teen squad of Sarah Clarke, Alexandra ‘Alex’ Davidson, Karen ‘Ren’ Santos, Simon Harris, and Matthew ‘Matt’ Williams, this is definitely gonna be a huge thing to ponder for the group and quite possibly very early on as well! Not only that, but this group of teens couldn’t be any more different from one another and that’s great. It gives all of them distinct personalities and it just makes them feel real to me. You’ve got Sarah, the shy(?) outcast, Alex, a pig tailed girl with some smarts to her, making her one half of a smart duo that hopefully we get to see more of with young Mr. Simon Harris.

Then we’ve got Ren, a pinkish (red?) haired girl who likes to make videos and is quite popular in Japan because of said videos. Last but not least is Matt, a fightin’ kid with a slight memory issue? Sarah seems to like him and whether or not this is why Ren starts to mess with him later on is unclear. But thankfully, this isn’t a big focus like it would be on something like the CW. As the primary focus is these kids getting into situations worthy of a Buffy The Vampire Slayer episode without actually meaning to do so. Ancient Egypt and an old guy looking to get some mojo going is one example of that that this book gives us. And it makes me wonder if he’ll be showing up again for revenge. How that might happen is one thing I’m eager to see how it occurs. Especially if he somehow manages to get to the present day time. Which would probably be a very bad thing for our five squad crew! 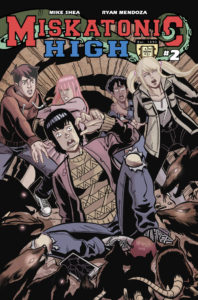 While issue 1 gives us a look at how things begin and leaving us with a mystery or two, issue 2 takes things a bit further. Only without tentacles and giving us a look at a history of one kid’s family history. I won’t spoil things for you fine folks who have yet to read these two issues, but let’s just say its not exactly the kind of family history you’d want to have. I am curious though if this will have any effect on future adventures that might could be used to this kid’s advantage. Unless of course she just chooses to ignore it as much as possible.

Its unclear what else Mike has in store for us readers but I for one am definitely looking forward to it as the not knowing just makes this even better. I also kinda wonder if he’ll throw in some sorta homage to Conan the Barbarian since Lovecraftian stuff and Conan are kinda related as a co-worker once told me. Mike also has a Kickstarter in store where Miskatonic High is concerned and I hope you fine folks will be helping it out when the time comes! I’m glad I was given the opportunity to read this title and I look forward to more! Miskatonic High is also currently only available in digital format as well.

Summary: In the rustic hills of the small New England town of Miskatonic lies the prestigious Miskatonic High School. When the Community Service Club goes on a field trip, they’ll be launched on a terrifying adventure that will change their lives and birth an evil into our modern century. This is the beginning of the six-issue first season of the new high school horror series Miskatonic High.