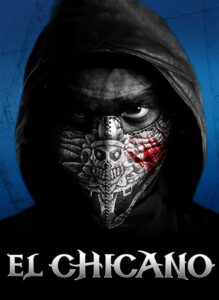 ‘Our streets, our fight, our hero’, the tagline of the movie known as ‘El Chicano’! A movie being billed as the first Latino/Latina Superhero movie and something Hollywood passed on. But we’ll get back to that in a little bit. When I first saw this movie at the Wal-Mart I work for, I at first passed on it, thinking it wouldn’t be good and then… I watched the trailer for the movie after I got home and you know what that did? It actually stoked my interest to the point that roughly 20 minutes later (cause I was hungry and needed some rest at the time) I walked my butt back to the store and bought the movie! And the end result of this, my good buddies? I’m a little on the nuts side about this movie now. If I remember right, the creators of the movie didn’t really base the idea of ‘El Chicano’ on anything already out there. Pretty much essentially creating their own thing.

And you know what? That’s beautiful. Yes, there’s a vibe of Daredevil/Punisher in how he handles the bad guys. And yes, there’s some predictable dialogue and a predictable cliché of what eventually gets Raul Castillo’s Diego Hernandez to mask up and start dealing out some damage when his cop side of life can’t do the job but that? That’s fine, its perfectly fine. Because at the end of the day, the idea is still its own thing with just a borrowed thing or two. I love that they nicely wove in a history (urban legend for the East Los area at that) of the character of ‘El Chicano’ long before Diego took on the mantle himself. Something like that would even nicely allow for some exploration of the past versions of those who had the mantle until either passing it on or dying. That Ben Hernandez Bray chose to turn a memoir about his brother into a Superhero movie with said Superhero being a Latino is fantastic.

Its not a cash grab or so called ‘forced diversity’. Its something that’s been lacking and hopefully with this around, we can see more of this kind of thing in various forms of media. Hollywood didn’t want to take a chance on this movie cause it featured a primarily Latino/Latina cast but Canada did. So huge Kudos to Canada for being willing enough to do what Hollywood wouldn’t just because it didn’t have a white male lead and dared to be just a little different. There’s a ton of potential for ‘El Chicano’ to expand beyond the first movie and deal with not only gangs and cartels, but any number of things. Especially something like the Supernatural as it was hinted Diego’s Aztec knife may have a connection to the Supernatural. And, it’d be amusing to see Aimee Garcia’s (always a delight to see in anything!) Vanessa Velez (Diego’s girlfriend? Wife? Wasn’t too clear on that in the movie) telling Diego ‘I told you so!’ when it comes to the not so normal.

Now how she handles his vigilante life is something else I’d love to see. Along with Raul Castillo and Aimee Garcia, ‘El Chicano’ features George Lopez as Captain Gomez, Jose Pablo Cantillo as Detective David Martinez (also Raul’s partner for Diego), David Castenada as Shotgun, Marco Rodriguez as Jesus, Sal Lopez as El Gallo, Emilio Rivera as Shadow, Marlene Forte as Susana (Momma Hernandez!), Kate Del Castillo as Cartel Leader La Hembra (Folks might remember Kate as the actress who starred in ‘La Reina del Sur’, which is how USA’s ‘Queen of the South’ came to be!), and last but most certainly not least, Joe Carnahan himself as one of the oh so ‘endearing’ FBI agents! Now while the box office might not have made back (or even more) then what it took to make the movie, I hope this won’t stop Bray and Carnahan from doing more with the world of ‘El Chicano’. 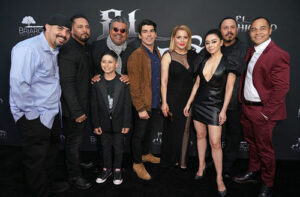 Cause that, my amigos, would be a damn crime if more couldn’t be done. Though I’d be all in for a comic book continuation or even something Netflix produced. Now while I do love the movie and appreciate that it didn’t get riddled with every cliché known to man, I do feel the story could have given more time to seeing Diego get used to being ‘El Chicano’ instead of just jumping straight away to the main reasons he took on the mantle. Along with possibly having left Shotgun alive for a future rumble/second round and allow him to stir up the pot even more. Especially where La Hembra is concerned! But again, that’s just me. And though regardless of the 1.4 million the movie made at the box office (and Hollywood likely seeing that as a failure for all I know) the money it did make is at least proof enough that there IS an audience out there that wants material like this.

Something that is definitely for THEM since it represents them and if someone outside of that specific audience happens to really enjoy what they see? Even better. It gives them (like me for example) something different to enjoy and tell their friends about. But the important thing, is that the Latino/Latina community having a movie like this out there for them to enjoy whenever they want. Heck, bring on a Police Procedural show with an all Latino/Latina cast! Maybe get Carlos Valdes involved somehow! And though things tend to get a little bad in the Barrio when the sky turns black, folks no longer need to worry as much. Because ‘El Chicano’ is here and ridin’ the streets to make it all just a little safer!

‘El Chicano’ now out on DVD and Blu-Ray!

Summary: After a gang leader named Shotgun murders several members of his own gang, Los Angeles police detective Diego Hernandez learns of a connection between the gang murders and the death of his own brother Pedro. Diego’s investigation reveals that Pedro had planned to resurrect the identity of a masked vigilante named “El Chicano” in order to repel the incursion into East Los Angeles of a Mexican cartel led by a Mexican nationalist seeking to reclaim California as Mexican land. When his partner is killed, Diego decides to assume the “El Chicano” identity himself to fight back against the cartel and seek vengeance against Shotgun for his collaboration with the cartel.