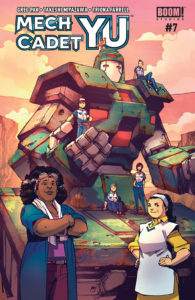 Holy Hell was I not expecting for things to go down the way they did in this issue! Leaving me with a kind of tension in my stomach from the shocking craziness! Readers already have a sense of something not being right due to previous issues but that feeling just grows in the first few pages of this issue. And for good (a little on the horrifying) reason the more one reads this issue. Everything going on may make one wonder who the real threat is in Mech Cadet Yu and I kinda feel that it ain’t the damned Sharg! Greg and Takeshi are definitely beginning to hold no punches and it makes me wonder what else they have in mind given what we see here. And yeah, the Mechs aren’t human, but considering they are sentient, you’ve definitely gotta feel for them (and their human partners) thanks to how far certain members of Earth’s Government are willing to go to ensure their own Mechs work.

And it seems though as if Cadet Park is definitely beginning to see things a much different way if how things went in this issue are any indication. Which makes me like her a bit more then what I did before! Certain new characters we meet in issue 7 also give you a bad vibe right away and I wonder if Takeshi did that intentionally so we’d catch on pretty quick. And I don’t know about anyone else, but I’d love to see certain folks like General Park get a major case of Karma on their asses for their actions. Actions that bring some great harm to the Mechs who’ve been willingly helping Humanity for years despite the fact they didn’t have to do a damn thing. Hell of a way to pay that willingness back you jerks! I’m also not sure I want to trust Skip, especially given how he’s been apparently kicked off Earth for years. But at least he’s not sinking to horrible levels that legit hurt Mechs. What happens next is anyone’s guess and the wait is gonna be Hell.

Will Cadet Park go along with her father’s plans or ultimately betray him? Will Team Mech with Skip leading the way prevail? Who knows for certain but I look forward to finding out! And hey, General Park? Maybe if you jerks weren’t doing shady things, there would be some mutual trust going on!

Summary: Stanford and his fellow students are enlisted into Earth’s last-ditch effort to drive off the Sharg invasion.