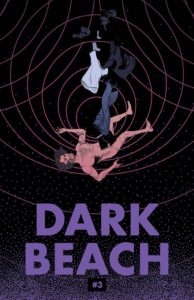 The summary given on the ComiXology page for the series doesn’t really touch upon a lot of the major aspects of the story at hand in the first 3 issues of the comic. And to a certain extent, it’s also slightly a spoiler. However, I don’t see this as a bad thing. Many a good story I’ve felt can easily be described in one brief manner, vague or not, and then sent out into the world to become a wonderful discovery for fans.

For example, Planetes, an anime I enjoy, need only be described as “garbage men in space.” Anymore than that, and it ruins the incredible personal journey that lay within. For Dark Beach, I would describe it as a “photographer’s dystopian sci-fi murder mystery adventure.” I think that sounds pretty cool.

Because that’s what this series is, for 3 issues we follow Gordo, a crime scene photographer, as he tracks down clues to a murder he’s gained a heavy amount of interest in and as the figurative bread crumbs fall into place, the bigger the rabbit hole Gordo finds himself falling into.

The setting is Earth in the far, far future after it’s been hoisted out of orbit in order to escape the sun and is now drifting in space using human-engineered artificial gravity and sunlight to keep everyone alive. It’s so far into the future that the sun itself is seen as no more than a legend, a conspiracy, but to some, a real thing that they would one day like to return to. And it’s this obsession with the sun, this want to uncover the truth behind why we left the sun’s orbit, IF we ever actually left the sun’s orbit, IF there was even a sun at all, the kicks this whole thing into gear. 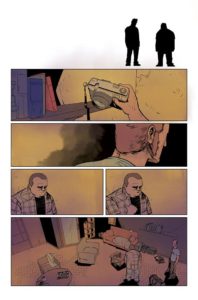 And so far it has been a compelling mystery adventure. Gordo is a fun main character to follow, he can be tender if he needs to be, he can be a real asshole when it comes down to it. He obviously wants to do right by the law, but he also has a drug addiction. He likes sitting quietly in contemplation, but he knows how to chat people up. I love characters like his who have dimensions to them. He’s not a suave detective, he’s no Harrison Ford. He’s just a normal guy with a talent.

The supporting cast is rather fun as well, Gordo’s best friend is just as lively on the page for the few scene he gets. And the people Gordo talks to in trying to get clues all have personalities and hidden agendas of their own that they’re playing tightly to the vest. I’m very excited to see how this all shakes out, and it is a breath of fresh air to see such a large cast fleshed out as they are in only 3 issues.

The third issue pushes the narrative forward by quite a bit a gives us a lot to chew on by the final page as Gordo is presented with a question that seems to make him question some of what he’s doing and whether or not he’s right to be doing what he’s doing. We also get some nice backstory on Gordo and his best friend Duke. They have such a nice chemistry as characters that I really like when they’re on the page together.

This world also feels lived in, like it’s been around for a very long time. It’s not sterile, no one is wearing spandex everything, and there are layered cultures that feel similar to what exists here and now. Separated but not distant. Not just unilaterally crammed into a single city with 3D billboards and advertising models. 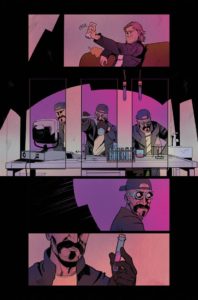 This issue also gives us some wonderful psychedelic imagery as Gordo takes some drugs that send him on a trip for a few pages and honestly that’s a great segue to discuss one of things I love most about this comic series so far: the art. The art is sooo good and so beautiful to look at. Some of the panel layouts are so experimental and flow easily, and the colors that grace these pages are just easy on the eyes and give this darkened pastel vibe that I am digging. 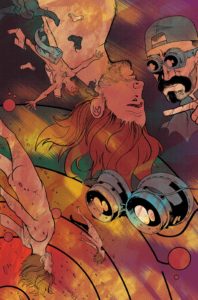 If I had to discuss any negatives for this series it’s that there are points in the narration and explanations that I personally find confusing. Sometimes the narration doesn’t always feel like it flows to me in any structurally meaningful way. And 3 issues in and I’m still not sure completely sure if it’s JUST this little sliver of the world that is encased in an artificial dome, or if the whole of the world is.

[Note: I am pretty sure it’s just this little sliver of the world, but the comic honestly doesn’t make it that clear if it’s the only domed city or if there are others or if that’s part of the mystery.]

Ultimately, however, I am so digging this comic and after finishing issue #3 I am so stoked to see what comes next. Definitely support this comic if you can. The first two issues are out on ComiXology now for only .99 cents each. And the Kickstarter for the third issue is out soon!
Final Score: 4.5 Sun Freaks out of 5

Summary: Earth drifts in space. Gordo, a black-market photographer, has discovered the true reason we left the Old Sun. But the biggest secret isn’t where we’ve been, it’s where we’re headed.