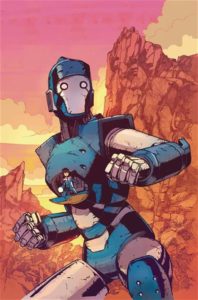 Well holy Hellballs, Batman, the s**t has hit the fan in this issue! After that little cliffhanger Greg Pak cruelly left us with at the end of issue 5, I couldn’t wait to get my eyeballs on the events to come after that. And folks? The wait to see what all happens with the latest Sharg attack did not disappoint at all to me. Proof that waiting for worthwhile things is alive and well with this 6th issue. Hell, to be honest, I honestly thought we were going to have a few fatalities by the end of this issue given all that happens in it. Which honestly had me on the edge so to speak until the very end. Kudos to Greg for some amazing writing like that and especially to Takeshi Miyazawa for such a superb job in selling the writing with his art once more. So far, we’ve seen Stanford and crew only in action (for the most part) while with their Mechs so to see them doing so without their allies was a very interesting if tense thing.

Though is it just me or is it kinda crappy that Stanford’s momma automatically suspects him of having done something wrong once she sees him and the others in the halls? Then again, she doesn’t necessarily have all the information at that point in time. And quite frankly, neither do we readers as its a complete mystery as to how the baby Sharg managed to get inside the Academy when none should even be around to begin with after all the clean ups. Something like that could have easily been an inside job since it seems like certain parties aren’t so high on the assistance of Alien Mechs and might just about do anything to see that end so they can use their own Human made stuff instead. Or its just a sign of how smart the Sharg truly are and the Human Race has yet to realize that. The possibilities for any number of things are there and it will be great to see where exactly Greg and Takeshi goes with any of them.

I don’t know if there’s been any interest from tv or movie studios to adapt Mech Cadet Yu just yet for live action or cartoon but if not, those folks are seriously slacking! Seeing Park and Sanchez kick ass and take names while not being stereotypical girls was pretty radical too. Although, do Sharg have names? Hmm… That’s something to pick Greg’s brain about sometime soon! Issue 6 was jam packed with action and quite a few great (even perhaps funny at one point) moments that were had. Though whether or not there will be any consequences due to a few injuries that were had remain to be seen. Why the good General Park does what he does at the end when things are all settled for the time being is unclear and it makes me suspicious given what we’ve seen of the man so far. Granted, he could just be taking precautions given the events where the Sharg are concerned but I don’t know… It just feels off to me. And the wait to see what all happens next is gonna be killer but if need be, I’ll get an oxygen tank to help keep me going until the next issue!

And who knows how intense that one will be!

Summary: The cadets come face to face with the Sharg, but without their mechs, will they be able to work together?