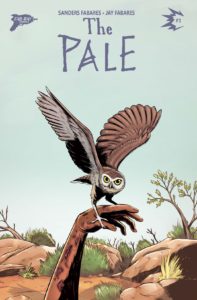 Somethin’ strange is a foot in the town of Rocket Ridge, Arizona and it all seems to begin with a dead body and a stone that was with it. Or at least that’s what one would think at first appearance where that body’s concerned but we see that there’s a lot more going on as the story goes on once we’re introduced to Agent Ink. Or Fink as he’s called by those he’s close with. Issue 1 helpfully sets up things as first issues (but without an origin story!) are wont to do. And Sanders and Jay Fabares (Husband/Wife duo for the win!) manage to sell me fairly quick on Sheriff Logan and his Deputies that protect and serve Rocket Ridge. They’ve all got a good rapport with one another and I love it as its clear they’ve all been around one another a good long while that you don’t need backstory for that. Kudos to Sanders and Jay for masterfully pulling that off as something like that’s not necessarily easy to do unless you really try. The good Sheriff is also turning 40 but shh, don’t let him know you know! All around, it seems to be a typical day for the Sheriff and his bunch. Aside from perhaps two locals getting into it over late rent! 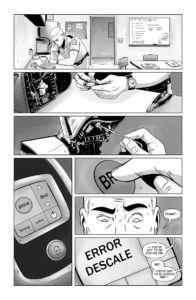 Not to mention dead bodies and chewed off hands! How the body ended up where it was when the Sheriff found it so far remains a mystery and I like that. As it builds up the anticipation for how it ended up there and if whether or not the local wild life and the Sun truly had anything to do with its horrible looking state. But this is what draws in Agent Franklin Ink sometime later, along with a mystery stone that just adds to the growing mystery Sanders and Jay are telling here. I gotta admit, I am loving Jay’s art and if you like your comics without color, you’ll be sure to like this title. She captures facial expressions pretty wonderful in my view and the little dog that shows up later on just makes me wish I could hold and love on the little guy due to how adorable he is! And one of the interesting things about The Pale is the fact that thanks to Sanders, I learned of a condition known as Prosopagnosia, which makes telling people apart by their faces rather hard to do! Which makes me curious as to what made Sanders chose to use that for a comic like this as no doubt, its gonna make for a difficult situation or two as the story goes on! 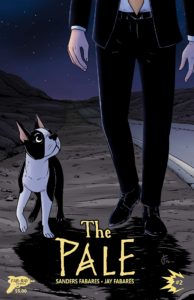 Plus, kinda giving Jay a challenge whenever we see this kind of viewpoint with Fink. With issue 2, we get to see more of the Rocket Ridge citizens, including a couple of teens who may or may not be unintentionally about to cause a serious problem later on. I love that issue 2 gives us a little bit of the Navajo language being used as seeing that sort of thing is great to see since its not often you get to see a Native American language used in a comic book. Issue 2 may also be potentially adding on to the mystery of the story thanks to a specially made item with an interesting story that gets told of. What that is, you’ll have to see for yourself as going into any detail would just ruin that for you guys. Issue 2 also gives us more of Agent Ink as he manages to get to Rocket Ridge with some assistance from a friend. Even if the landing does get a little troublesome as a special party for the good Sheriff is happening. And to me, that’s fun to see and it makes me wonder how well it’d be done if The Pale was to get a live screen adaptation.

We also see more of those two boys I mentioned earlier and its nice that at least one of them seems to have aspirations for his future. Whether or not that future will happen remains to be seen but hopefully it does! 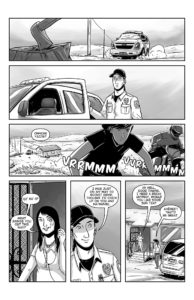 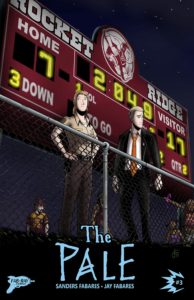 And again, I have to express how much I love the scenes Jay creates so wonderfully between Fink and that dog I mentioned before. Sanders’ writing with that is just as wonderful to the point you have a warm fuzzy feeling brewing inside of you. And if nobody else feels this way or somewhat close to it, something’s wrong with you! But with the mystery that hangs in the air that we barely know anything of, especially where Fink is connected to it all in a weird and worrisome way. The scenes between him and the dog just worries me a little for that little fella’s future. Hopefully my worry is for nothing though! Issue 3 is also where I pretty much start developing that worry as well. Another thing I’m curious on is the seeming animosity between Deputy Dawn and a lady Fink has a run in with by the name of Emma. Bad break up or just some kind of distrust Dawn has towards the other woman? Lots of mysteries and questions that we just don’t have answers or a clear view of that helps form the larger mystery of the story!

Of course Fink might have some trouble of his own thanks to Sheriff Logan being kinda suspicious of him. How that will play out is anybody’s guess aside from Sanders and Jay and they aren’t talking! Issue 3 also leaves us with a potential for more trouble to start up near the end and I bet that’s gonna be a ton of fun for the Sheriff and his bunch! 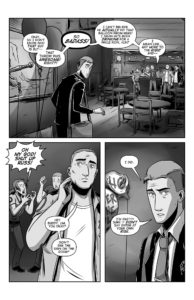 The ending though… That ending at the end of 3 is a little on the spooky side and I wonder what kind of connection that has with the rest of current events. If it even has a connection to begin with and isn’t a separate thing that might have to do with Fink. Sanders and Jay have successfully hooked me with their creation here and I can’t wait to see what happens next. Perhaps part of the mystery might be uncovered too! Or perhaps not. Either way, bring it on!

Editor’s Note: Interested in checking out The Pale for yourself? Then you’re in for a treat as you can either purchase copies on Gumroad or ComiXology!

A coffee maker on the fritz was the biggest problem of the day for the Rocket Ridge Sheriff’s Department. That is until a chance encounter leads them to the location of a mutilated corpse in the desert.

Franklin Ink, a face-blind FBI linguist, may be the only one who has answers about the victim and its killer.