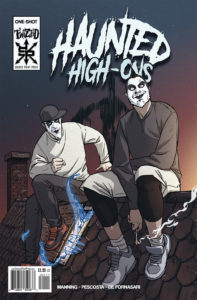 When I first learned that Source Point Press and the dynamic duo known as Twiztid were doing a comic together, I was interested. Very, very interested as while there’s been previous Twiztid (and ICP I think) comics that’s been published, I’ve never had the opportunity to read those. So I took it upon myself to reach out to Source Point Press (Bob Salley/Salvagers baby!) on Twitter via DM about checking out the book and thankfully enough, SPP was nice enough to let me check it out! Now some who see this might think of the whole thing in a negative manner due to whatever views you may have of ICP, Twiztid, and Juggalos in general and think this is a poorly written one-shot. But its anything but poorly done and instead, highly enjoyable and makes me think Paul and Jamie (The duo of Twiztid respectively) could have a future in comics if they ever decide to seriously go for it. Their personalities are easily seen through out the pages of this one-shot and it makes me wonder how often Dirk Manning had to struggle to keep a straight face around them. While Paul is something of a serious guy in this, he’s still fairly amusing to see even while essentially being the straight man to Jamie’s antics.

And yes, you should have an open mind when reading this. Not because of the ghost hunting element but rather due to the more gross element we see in the beginning at the store the two run and sell party supplies out of. Along with offering hunting services for ghosts. Makes me wonder if those two ever had an experience like that before with a bathroom or its just something the two came up with based on things they may have heard from others who’ve worked in stores and the like. I myself have a story or two I could tell you folks about store bathrooms. Though thankfully not something as nasty as what we readers get to learn of where their store’s bathroom is concerned. And I don’t know if its just me, but it feels like there’s a clear shout out in this where ICP’s ‘Never Let This Pass Me By’ but I could always be wrong. 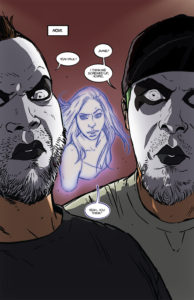 Now its easy to see our boys are in it for the money where the whole ghost hunting aspect is concerned but Karma (heh) easily has her way with the two when a lovely young vision enters their shop with a problem that she needs their help with. Kind of a scary thought when you think about it! Her problem is one the boys think they can make some easy money off of cause ghosts aren’t real, right?

Well, if they weren’t depending on who you ask or what you decide to write, there wouldn’t be much of a story to tell here! All I’ll say is that the boys quickly find out that their easy score is anything but easy! Even if Jamie knowing something later on is an easily seen convenient plot device. Not that that ruins the story in my view but it might for someone else if they have no fun bone in them! I’d love to go on and on about this one-shot but that would mean a lot of spoilers and I want to avoid that for those of who you who are interested in checking out this offering from Source Point Press. And if memory serves me rightly, Twiztid: Haunted High Ons is currently in the latest issue of Previews so if you haven’t yet get to your local comic shop and have them order it today! As missing out on Marianna Pescosta’s art and Alessandro De Fornasari’s colors would be a true crime for sure! Could even get a menacing ghost after you as well. 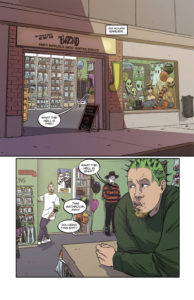 Now I am disappointed that this is only a one-shot as like I said earlier, as I greatly enjoyed reading this to the point it got a laugh or two out of me. And had I known how enjoyable this one-shot is, I woulda read it while I was in a funk for a time. Hopefully, we’ll see Dirk and Twiztid team up again in the future for another enjoyable tale and who knows, maybe Haunted High Ons (And apparently will if Twitter is any indicator as I recently learned!) will become more then a one-shot if sales are good and demand is there. One can hope! Now, if you’ll excuse me, I’m gonna go replay Man’s Myth cause some myths just don’t die!

Editor’s Note: You can also head to the Source Point Press website to get your ordering on for Twiztid: Haunted High Ons!

Summary: Jamie Madrox and Monoxide – collectively known as the horror core rap duo TWIZTID – have carved out a comfortable side-gig for themselves as fake ghost hunters… but what happens when a routine house call yields not only a ghost, but a killer demon to boot? Hijinks and horror, of course!