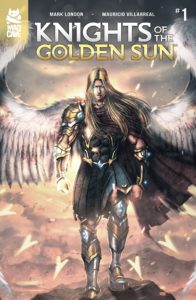 I have said it before and I’ll say it again, I LOVE when Biblical/Mythological themes are used in various forms of media. Whether its a novel, a comic book, tv show, movie, or otherwise. As there’s just so many ways you can tell a story with those kinds of themes. And Mark London has certainly given us a new entrant to enjoy with his first issue of Knights Of The Golden Sun! Less Mythological and more Biblical (unless you count the two as the same) and all kinds of enjoyable. Especially with that beautiful art done by Mauricio Villarreal! I’m curious as to what inspired Mark to create KOTGS, but whatever it was, I’m thankful as Hell for it as I’ve greatly come to love his work done in other Mad Cave Studios books like Battlecats and Midnight Task Force. The fact this is set in the very olden times instead of current is another nice touch and Mauricio certainly captures it all very well with his art and the double duty with colors!

Its an interesting premise when stories feature God vanishing for whatever reason, leaving Humanity and the Angels themselves uncertain since no one’s got a clue why he went bye bye. Its been done a few times in properties like Preacher, Supernatural, and After The Apocalypse, but not to the point its an over used theme. Like Zombies. Mark also nicely captures the douchey evilness of Lucifer himself in this. Who’s certainly willing to take advantage of God’s vanishing! And it seems like he might not be alone as well. Though if whether or not they are working together is another thing entirely but perhaps we’ll find out as this series goes on. I love that the Angels aren’t all males and that we get to see a few Biblical (and not so Biblical like Alexander The Great) elements mixed into this story and done so in a great way. Such as David and Goliath for example. And if I’m right, Goliath has a later appearance in this story that was interesting to see. Unless this giant just has a strong resemblance to him. 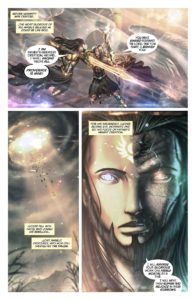 I’m curious though if Goliath and his kind are Nephilim? Not sure if its ever been said since Nephilim are mentioned to be giant like so it would be interesting if he was. And making for even more of a fun story since they are said to be damned hard to kill! KOTGS #1 is off to a fantastic start with all the intrigue and action its set up here. Even introducing me to the Angel known as Sandalphon(e), who possibly seems up to no good with the lovely Azrael! Issue 1 also certainly gets you feeling a lot of sympathy for the lovely Uriel. Who could easily be taken (mentally) advantage of thanks to how lost and abandoned she feels. Though it seems a certain pep talk she gets helps. But how much it helps remains to be seen! If there was ever a live adaptation done for KOTGS, I would pick Shelley Hennig to play the role of Uriel. Since it just feels right in my view after getting a good look at the character without her robe covering things like her hair. Plus, Uriel’s quite the kickass Angel as a few fellas find out!

Whatever happens next is something I can’t wait to read about. Especially in regards to what all goes down for Uriel, Gabrielle, Michael, and everybody else we’ve been introduced too so far since Mark had to cruelly leave us with a cliffhanger! Knights Of The Golden Sun is NOT a comic to sleep on in my humble view. Especially if you love different uses of Biblical themes being done without pitching a fit about it. And since I’ve mentioned cast picks for a live adaptation, cast Meagan Tandy in the role of Gabrielle!

Summary: Four hundred years separate the Old Testament from the New Testament, during that time, neither man nor angel could hear God’s divine message. In His absence, an age of chaos began. With humanity at the wayside, a power struggle erupts among the Archangels over who will control Father’s throne.