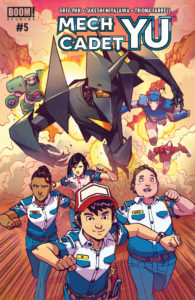 I am so, so, so, SO happy this title got a continuation! Cause issue 4 left off with such a cliffhanger that it would have been an absolute crime to leave things like that! And the beauty that is issue 5 wonderfully continues this great story. The wait for this issue was well worth the wait in my view as not only do we get to see the Engineering and Janitor Corps in action, but we get to see Sergeant Dolly Yu (Stanford’s mom!) be a badass in her own right when she’s not worried about her baby boy! Greg Pak and Takeshi Miyazawa gives us a little more insight to the world they’ve created here while giving us more things to question. Especially where Skip and the Hero Force One Prototype are concerned. Why exactly is General Park and General Felix so high on this Prototype being such a success? How many have they even tried to get going until they got to this one? Do they really hate having to rely on Alien Robos so much that they are willing to risk a potential issue with their own man made Robos?

What exactly is the real deal with Skip that was alluded too near the end? Is there possibly more eggs that were missed? All questions that I look forward to finding out the answers to as this series goes on. The interior work done by Takeshi, Triona Farrell, and Simon Bowland continues to be great in my view. And I love that Chief Max has her own Robo affectionally known as ‘Mother Tank’. Whom I bet could still easily kick some Sharg ass despite ‘her’ current condition! I feel sorry for Dolly however as she so badly wants Stanford to be safe since he’s all she has left in the world, but its fairly clear that that’s just not gonna be possible as this series goes on. Case in point, to the last scene of the issue as that’s a certified ‘holy crap!’ moment right there! Mech Cadet Yu is back in fine form and I can’t wait to see what happens next after that last shocking scene of this issue! Don’t miss out on the 10th or you just may regret it!

Summary: After the Sharg’s violent return, the Sky Corps Central Command scrambles to deal with the crisis but not before grounding Stanford, Park, and the others. The cadets continue to train under Skip in secret but it’s not long before the Sharg strike again-this time, in a form mankind has never seen before.