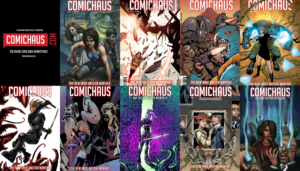 While this isn’t the Final Countdown, this is, in fact, the third and final part of Scott Mack’s Comichaus Retrospective! And fair warning, you may need a tissue as Scott’s liable to tug at your heart strings in this final part! So if you’re ready, let’s begin!

If the name of Tom Ward is familiar, that’s because Tom, along with Luke Parker, brought out one of the best publications in 2015, “Merrick, The Elephant Man”. It was one of the success stories of that year on the independent scene, indeed, Parker has gone on to work with Comics favourite, Joe Kelly, because of it.

Tom Ward has a remarkable sense of focus, his vision feels very specific, which channels it’s way through this one-shot story, featuring some deeply disturbing art from Iain Laurie, this one is not for the squeamish.

There’s nothing more disturbing than finding out the truth about your Parents. Or is there? 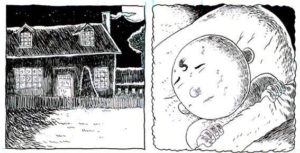 This one pleasantly surprised me. What initially seems like a stunted and limited vocabulary in Clark’s script about a cybernetic plague being spread by Rats, unveils why at a later point. It’s quite smartly done, and Pertile provides some very nice-looking art.

The only criticism I’d offer for this short is that Pertile is another Artist here that has supplied very little in backgrounds for this story, with Letratone effects replacing them. There may be some deliberation at work here, and generally, it’s still nice to look at, but whether through neglect or design, it’s suffered for that.

Still, a nice introduction for me to both of these Creators, despite the critical comments. 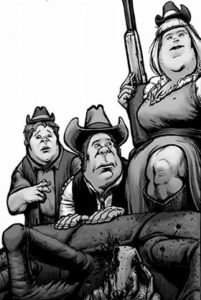 Furlong and Hartmann are well known for their indie book, the eloquently named “Shit Flingers”, that’s been doing the rounds. For those that are not easily offended by titles like this, open up that book and you’ll see what the buzz is about.

Likewise, that humour of Jimmy Furlong is here again, and a lot cleaner for you on this occasion, a story about time-travelling Holidays, a mini adventure that’s somewhere between Westworld and Rick & Morty.

Andrew Hartmann’s art has a Comical, Cartoonish quality, but with stronger detail and refinement, like Jerry Ordway doing The Beano or Dandy.

It’s fun, it’s harmless, one for all the family!

Gods Of A Lesser Sphere (Comichaus #7)

Man, this is smart. In just 6 pages, I’ve seen one of the most intelligent observations on Human nature and the hierarchy and structure of everything that makes the world unbearably corrupt.

How would an alien life-form react to it, especially if it had seen it’s entire race wiped out, because it behaved in the same way?

This is either the darkest, or most pro-active side a Superman-like creature might take, depending on whether you’re a “half-full or half-empty” kind of person and know which is which. To tell you the truth, in this case, I’m not so sure myself. 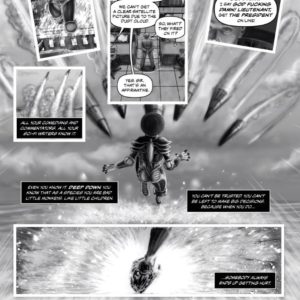 This is my first exposure to Mark McCann’s work, and if this very strong entry is anything to go by, I expect we’ll be hearing a lot more from him.

I’ve had some familiarity with David Yeh’s work, and being a very solidly converted Valiant Comics fan that I am, I got a bit of the old “Divinity” thing going through my head on this one, not that Yeh’s style bears any similarity to either Trevor Hairsine or Jelena Djurdjevic’s art, but it really is channelling that God-like energy.

About as strong as you can get as an introduction to your work, quite frankly, it’s excellent.

Iain Laurie returns to Comichaus, this time with another Writer that’s been getting talked about all over, Fraser Campbell.

Splendid Grins is brilliantly insane, perhaps a bit like early Grant Morrison and Simon Bisley doing “The Tick”, after getting slammed out of their minds on psychotropic drugs and adrenaline.

Don’t try to reason with it, don’t even try to explain what’s going on! I don’t even entirely know myself! 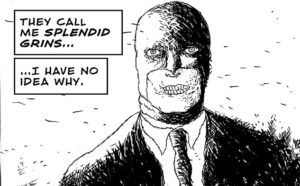 Splendid Grins is the titular Hero, an agent of O.R.D.E.R. that, er, fights crime, or, uh, “normalcy breaches”, with, um, that Zork guy, defending against threats from the likes of “Dada Blacksheep” and the “Altamonsters”.

Dear God, I want 27 volumes of this lunacy on my bookshelf straight away! If you only ever buy one issue of Comichaus, this might not be the one you should, but you’ll not regret it!

Yes, not one, but TWO short stories from Fraser Campbell in in one issue! This one, however, is very different from “Splendid Grins”.

It’s deeply sinister, and shows a very different Fraser Campbell here, a seriously disturbing one with some terrifying git sitting on a park bench that corrupts, steals and feeds off of people’s negative energy. Keep him away from social media, we’re doomed otherwise.

This just goes to show the versatility of Campbell, and Soffe’s art is as equally disturbing, his realistic art style attentively conveys both the mundanity of everyday living and harrowing imagery of the said terrifying git with equal respect and measure, in fact, the quality of which, might even give a little chill to The Walking Dead’s Charlie Adlard, it’s that kind of standard.

Some other things to know about Comichaus..

In addition to all the great material I’ve discussed, there’s a lot of material I haven’t discussed either, as much as there is here, I’ve talked about only half of the content that’s been published to date in the pages of this anthology.

And all this for just a fiver. £5 per issue, and half goes to the Creators. Considering the price of a modern Comic now, and for what you get most of the time, even though some the material is hit and miss, it’s difficult to find publications that give and do so much.

It’s exactly why this publication is so important, indeed, the British influence has resonated through American Comics prominently since the 1980’s, since Karen Berger brought over “The British Invasion”, via DC Comics, or more accurately, Vertigo. Publications like Comichaus, Aces Weekly, Papercut & Inkstains, 100% Biodegradable, Sliced Quarterly, and Flesh Tones are all doing their part to give a spotlight to British talent.

Independent Comics are the future of the industry. This is not to say the mainstream won’t survive, I really hope it does, but even the success of Marvel & DC relies on the independent circuit, so if you’re looking to support indie Comics, which you probably are, since you’re here, I can highly recommend Comichaus and all these publications.

Lastly, there’s some people that deserve to be mentioned, all of which have worked on a good number of the stories mentioned here, and even the ones not mentioned.

The unsung heroes of the Comics scene, the Drummers of the band, the reason why every time you pick up a Comic, it doesn’t look like Charles Manson wrote it.

These folks never get enough of a shout-out, so let me give you a brief rundown on those talents I’m talking about.

Colin Bell – Best known for “Beast Wagon”, with Owen Michael Johnson and John Pearson, a massive Small Press hit, with some serious coverage from Forbidden Planet, Bell is just everywhere at the moment.

Nikki Foxrobot – describes herself as “More expensive than most. Also better than most.” It’s a bold statement, and perfectly accurate, with a list of clients like Games Workshop, Markosia Enterprises and Bluewater Productions.

Micah Myers – One of the Hardest working Letterers, not just in the British scene, not just in the independent scene, but in the industry today. Big-hearted Micah has also turned his hand towards writing now as well with “The Disasters” from Loophole Comics, he is also the Founder and Editor for Kayfabe Anthology and a resumé to make the eyes bleed, which include, Image, Dark Horse, Action Lab, Devil’s Due Publishing, 215 Ink, Zenescope, Scout Comics.. I think you get the idea.

Robin Jones – A repeat award-winning Letterer, who you may have noticed I’ve already mentioned as a Founder at Madius Comics, the Co-Writer with Mike Sambrook on God knows how many titles already, Robin Jones is a madman that needs containing, before it’s too late! I am still trying to confirm the story about wrestling a Bear in the Yukon, but I assure you the Sea Shanty stories are all true. I blame Rory Donald.

Ken Reynolds – In addition to being an all-round nice bloke, Ken is also the Publisher and Editor of Sliced Quarterly Anthology, Author of the Small Press hit, “Cognition”, with the very talented Sam Bentley, and a Graphic Designer with over 20 years of experience.

That’s it, I need to eat. Go buy, go enjoy. Well go on, get outta here, you’ve got anthologies to order!