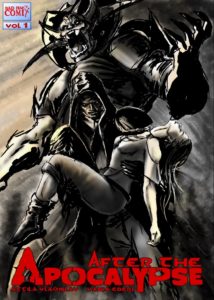 26 pages just isn’t enough for me, folks. Which goes to show how much I enjoyed this take on Biblical characters and the whole aftermath of the End Times theme. No matter how it might have come about. I like that this is done in black and white save for a little color here and there. The first chapter is basically your standard origin story telling but it does tell us enough about the kind of world Damien Ferro lives in. And how it came to be and feels almost prophetic too considering our current President and his rivalry with North Korea’s leader. Although we’d certainly have less Angelic beings and the like however! I kinda wonder if the initial first appearance of Tesla of the Hell Riders is a deliberate shout out to Stan Lee? Which is pretty fun to see thanks to Vanja Eberl and if whether or not Vanja did this again with Damien’s love interest, Monica with another well known figure in Pop history. Whom, through some unfortunate circumstances, sets our boy Damien on an expected path. One I’m curious about as to when exactly he becomes fully aware of what all’s going on.

I like that, despite the fact that Damien’s got a new house guest so to speak, that he’s not really calling the shots 100 percent of the time. As I imagine that could bring a great toll to Damien given certain hints we see sometime after he gets his new house guest. One thing I’m quite curious about however is if all the Angels except Death are dead, what does this mean for God himself? Is he alive? Is he off somewhere in the cosmos drunk off his ass cause of how his idea of Humanity turned out? And ultimately saw his Angels end up dead cause of how Humanity turned out? Questions I hope to see answered in the future from Attila Vladislav! I love though that Death is the only Angelic being left alive. As it makes sense that a being like that would still be alive in some form since Death isn’t exactly something you can get rid of. And with where Damien ends up near the end of this first volume has me wondering how things are gonna turn out.

Especially for those who took him in after however long he’d been out and about as Death! As things seem like they are about to get quite ugly where some of Damien’s old friends the Hell Riders are concerned. I’m glad that David Paul did the translation for this comic from Croatia as it has been a treat to check out and I can’t wait to see more of this thanks to his translation efforts and the creativity of Attila Vladislav and Vanja Eberl! So don’t miss out on this Post Apocalyptic world with Biblical themes!

Summary: Following a nuclear conflict to end the War in Heaven, survivors on Earth fend off gangs of cannibals and mutant creatures to secure contaminated water. A former gang member, Damien Ferro, loses the woman he loves and stumbles into a temple where the Angel of Death embues him with his spirit. Now he must search out six demonic spirits and expel them from the world.