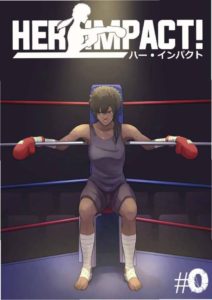 From the mind of Samurai Shin comes another powerful comic about legacy and the choice to follow or fight against it. Where as Shin takes place during the age of the samurai, Her Impact is more modern and focuses on fighting with your fists rather than swords. And it’s a fun first issue. We’re introduced to Sadie and her world, we get to know a bit about her father’s background and the boxing legacy he left behind. As well as we get a taste of what’s to come.

For #0 issue a lot actually happens here, and it surprised me that it was a full length comic at that. Not many prologue stories are. Generally, they’re smaller and act as a gateway into the feeling of what to expect rather than acting as a full fledged introduction. Her Impact #0 being different is not a bad a thing, in fact it’s quite the opposite. It’s exciting to think about what’s to come with issue #1 now that issue #0 has gotten so much introductory baggage out of the way. It makes for a cleaner start and possibly and easier entry point for people who start with #1. 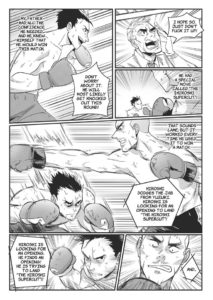 I like Sadie as well. She’s hard headed and stubborn, as well as a bit over-protective of her son, but that’s all made abundantly clear in the story. It allows for her character to type to eventually buck any trends her father may have had because we know how independently her own she is.

My biggest complaints with this comic so far is two fold. The scene transition from where the flashback with her father leaves off and the story of Sadie in present day begins is really rough and it feels like there is a full page missing in-between the two. The last moment we see of her father isn’t really a cliffhanger but an awkward pause in time. And there isn’t anything big that happens to leave us going “but what happened next??”

The other is with the over-abundance of expository dialogue/narration. And this is something that is harder to control because you want to be able to convey clearly to your readers what they’re reading. You don’t want to have them leaving with unnecessary questions. However, I do feel there is a fine line between making sure every detail is left without little question, and the nuance of making sure readers are only focused on the important details. If anything, I feel Mikel’s script needs to be trimmed down a bit as to only convey truly important information rather than giving us everything all at once. 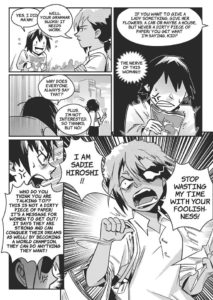 That all being said, this book goes a long way to feeling like a genuine manga. It’s style, which is even drawn in a more natural looking manga style than even Shin was, really makes me feel like I’m reading a series from my childhood. Mikel and Digitkame do an amazing job at giving a nostalgic feeling in this comic’s delivery than I ever imagined having. Especially for a series I had never read before.

I’m really enjoying this overall. From the fun characters, to the intriguing legacy story, to the nostalgic art style, I cannot wait to see where Her Impact goes from here and what it’s impact will be on me.
Final Score: 4 Hiroshi Supercuts out of 5

Editor’s Note: Want to check out Her Impact #0 and perhaps share with a friend? Then head right here! Also, fun fact! There’s the very real potential that Her Impact could join the ranks within Noir Caesar!

Summary: Sadie Hiroshi, an African-Japanese woman, who took over her father’s legacy in boxing. She’s a single mother and having a hard time in life with her profession. With these things currently going on in her life, what will be the impact of boxing on her?