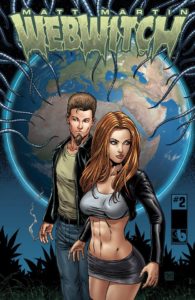 Webwitch is an interesting series. From the same comic company that brought you Belladonna, I must warn any of you who plan to read this that the series does contain graphic nudity and sex. I wouldn’t consider it a pornographic series however which chooses to put the sex first and then the story later, in this the nudity and sex is just a part of it while the story takes precedence.

That being said, Martin and Vigil both do go out of their ways to set up scenarios where Nina is nude a lot in this series. From telling us how she often gets information as an agent through having sex with her assignments, to showing us a version of her in the dream realm where she’s always nude or having sex, to later in the comic where there is literal webs shooting out her vagina when fighting her enemies.

That last part being the strangest thing to appear in this comic filled with strange happenings.

As a whole Webwitch isn’t a bad series though, it’s just not an intelligent one and no it doesn’t try to hide that either. Cut into two different stories each issue, Martin takes on telling the story of Nina in the present day while Vigil – the creator of Webwitch – tells the story of Nina’s origins and how she became the “last of her kind.”

In the present day storyline Nina’s world comes tumbling down when her and a fellow agent, Armstrong, begin having an affair and the government agents they work for don’t take too kindly the news. This leads to a manhunt of over the course of a few issues where Armstrong and Nina try to get away from them only for Nina to get shot and killed during the hunt.

During the time she’s “dead” she’s raped by the men looking after her body in an intensely gross scene given the idea of necrophilia, but the two are killed when Armstrong catches up to them. He’s able to bring Nina back but is killed himself soon after their reunion. It’s pretty cliché and unfortunately I didn’t buy into their relationship the much throughout the bit of time they were together. No matter how much Martin wants me to believe in it.

nd half of the present day storyline features an invasion by the second faction of Webwitches who’ve made their way to Earth as the Queen not only sends out an agent to find Nina but also lets off a a pulse weapon that ends up killing millions of people across the planet, including the President. Following that the new Webwitch Queen attempts to make Nina the birth mother of a new generation of Webwitches that are half alien/half human.

The art for Martin’s story is detailed and looks great. It’s one of the most powerful things about the book and it doesn’t shy away from showing detailed gore during the more gruesome scenes as well. I really liked the main art for Webwitch, though I felt the overall story was lacking and fell more on the action side of things rather than the character side, I wouldn’t mind reading more.

Vigil’s story taking place in the past, as I said before, details Nina’s origin as to how she became the last of her kind. This story I was less keen on. The art’s not as powerful and the story is more basic. Still just as gruesome and filled with explicit sex but it relies a lot more on action to tell its narrative.

Overall Webwitch could have been better, but it wasn’t outright awful. It could do less to straddle the nudity and the sex and focus more on story and characters, but I didn’t hate what I read. Now, whether I can recommend this series? Well, if you like action and sex or at least can turn your brain off long enough to enjoy either of those two then you’re good to go. If you’re looking for a deep story or rich characters you’re just not going to find it here.
Final Score: 2.5 Green Alien Women out of 5

Summary: Last of her kind, Nina is a Webwitch – an alien species of humanoid women with spider like abilities – whose working for the government while in the guise of a human female. However when another faction of Webwitchs appear before the Earth Nina is forced to choose whether to fight for her own kind or for her adopted kind. Which will she choose?