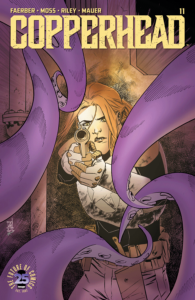 Well, well, well, Copperhead is finally back in action and all I can say about that is… THAT ITS ABOUT DAMN TIME! The months long wait for this was like being stuck out in the Desert with very little to no water at all. Meaning a very horrible struggle when it came to waiting for that downpour of that freshness you’ve long desired. And when I saw this in this week’s releases from Image in my inbox, let’s just say it rained hard for me. And I gladly ran out in that downpour and got soaking wet. Something I found very, very worth doing in my view! Despite this being pretty much a set up for the rest of the story arc, the wait for this was worth it. As Jay Faerber is nicely setting things up and I am very curious to see how it all plays out. Especially with the recent death featured in this issue! That bit of business and the fact that Sheriff Clara Bronson’s ex husband is on the loose, along with some funny business Hickory is pulling will be interesting to see play out in this arc. Though whether or not it all gets dealt with by the end of this arc is anyone’s guess.

But I could see at least one or two of those things being a contender for still being problematic in the next arc after this one. The quip or two used with a possible suspect in the recent death in this world of Copperhead is something I found fairly amusing. Especially since the possible suspect’s got tentacles for legs! Which… with her alien physiology, must make things interesting in the bedroom. But we aren’t going there! It was mentioned that Drew Moss is a newcomer for the book where the art is concerned. And to be honest, I really didn’t notice much if any differences with his and Scott Godlewski’s. Who’s still around on the book where covers and consulting is concerned. And I like that there’s not much if any differences in their art styles here. Keeps the feel of one of the things I’ve come to love about this title in my view. I’m also loving that Ron Riley and Thomas Maner are still with the book and kicking ass in the colors and letters areas respectively.

And while an old friend of Clara’s is in town with bad news where her ex is concerned and trying to act like he ain’t interested in re-kindling things. One would likely think he does want too considering he took it upon himself to deliver her the bad news. Well, that, and one or two facial expressions of his. Of course I could be wrong on that part however! Jay has excellently set up things here and I look forward to finding out who caused a death to occur, if Boo really is going the way of Hickory (which with the surprise we get near the end it certainly feels that way but hopefully not), how long it’ll be before we see a rumble between Clara and her ex, and if whether or not we’ll see her son and Ishmael talking about life again! Or heck, talking about anything really! I could probably read a whole issue with just those two either talking or getting into some trouble and ol’ Clara not being too happy about it!

I urge you good folks to get this when you get your new comics this week! You will not be disappointed. Especially if you’re already familiar with this title and are perhaps wary cause of the long wait. KICK ASS SHERIFF BRONSON!