The Wolf is Back!

Amigo is proud to announce the return of the avatar of the North, the one who teaches us to fight, to protect, to survive: The Ghost Wolf! El Torres’ epic barbarian saga begins anew! But also don’t miss the weird revenge thriller par excellence. From Ertito Montana comes the finale of the first arc (yes, there’ll be more) of the cult-exploitation-kung-fu comic: Street Tiger! First issues have been received with applause from critics and reviewers… A smash hit that you will enjoy!! 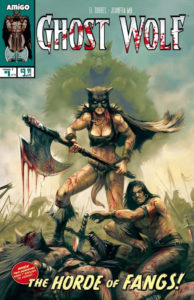 Ghost Wolf: The Horde of Fangs #1

An age of peace. The North was finally changing. Seaports were opened to trade, new settlements flourished… Until a horde of callous warriors joined to lay waste to the northern lands, claiming that all foreigners must die… and that the Ghost Wolf is with them! But Mara, the last warrior taking the mantle of the demigod, has other thoughts!

The acclaimed miniseries Ghost Wolf from award-winner writer El Torres thunders its way to comic shops with a new story arc! A bloody and vengeful epic saga that all sword-and-sorcery aficionados must read, with the spectacular art by new talent JuanFra MB!

Ghost Wolf has received a “Spotlight On” from Previews!

Story and art by: Ertito Montana

Somewhere in the city slums, Street Tiger wakes up, not even remembering how he survived the explosion and the brutal beating from Egghead’s goon, the Shark. Meanwhile, at the city suburbs of Barrio Crema, what seems to be a drug deal takes place. But as always happens in NamCity, nothing is what it seems!

“I f***ing love this comic – it’s violent, well-written, blackly funny and pretty damn great in every regard. Imagine if you took an artist like Adrian Tomine or Peter Bagge and told them to create the most grindhouse/kung fu/B-grade schlock action epic ever and THIS would be what they might come up with…if they were HALF AS GOOD as Spanish creator Ertito Montana.”

Story and art by: Ertito Montana

Street Tiger is back to work, but this time he isn’t alone! After his failure taking down the Crime Lord Egghead, the Nam City vigilante enlists the help of the deadly Black Dove. Don’t miss the last issue of this head-busting, knuckle-cracking, exploitation comic by innovative artist Ertito Montana!

“I would encourage anyone that’s been looking for a small press/indie book to sink their teeth into to check out Street Tiger. Street Tiger is different, adventurous in its storytelling and art style and let’s not forget weird. Street Tiger is a weird book, and I’ve been dying to read a weird book for a while.”

Read here the full saga of the Ghost Wolf, the spirit of vengeance of the Northern Wastes. When the clan of the Sons of Corr lost their courage, they were swept by the wild tribes. But there was one man decided to fight… and paid with his life. He will become the vessel for the long, forsaken spirit of vengeance… The Ghost Wolf!