A time of war, of religion and when heroes of myth and legend 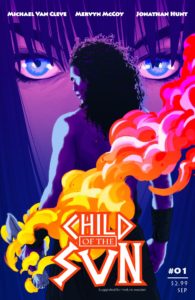 walked the Earth. That’s what this is, something of a history story. Where the mighty Heracles meets a young boy and their stories become intertwined as one. But first you must get a look at this world, how things are and how little man has changed over all this time.

The world was smaller then and the fight for territory and dominance was much more extreme. Worldwide travel wasn’t a thing yet and the world really did center around the Mediterranean for these people, sure the Far East was there but that was foreign land with foreign peoples who just as ruthless. Still Egypt was a prize and with their own tribes as well as those of the Israelites, all twelve of them, there was much conflict in the region and Mervyn does well to showcase this with his interior work.

The first half of the book reminds us that they all worshiped, sacrificed and believed in God or the Gods of their region as the case may be. I have a great appreciation for this, the tradition and the faith that we’ve lost so much of today. It’s kind of magical to see how this is all presented to us. I don’t advocate sacrificing animals or people in today’s world but I can appreciate the faith, the belief and the beauty of it then.

When we finally meet Heracles it’s clear he enjoys the vices of his stature. He’ll introduce this young boy to his way of life, though being Greek and worshiping Zeus I would like to see some bi-sexuality at play as at this time that was well within the norms of society. I like how Michael writes this and fleshes out the personalities. He makes them feel familiar to what we know of their legends through oral history. Will there be some things we don’t know or expect, possibly but for now it’s well done to make it seem “right.”

teriors here are wonderfully done from the imagery and style of the first half to the more detailed bodies and styling of the second half. Mervyn impresses me with his attention to detail and the majority of this book is in black and white allowing us to see his work really well and shine on the page. The limited use of colour has an impact as well on those moments we see them. I have to say his use of page layouts with their angles and perspective are well thought out.

Historical figures are often misinterpreted as being mythical because of the lack of evidence they were real. Oral history with so many tales of their exploits however suggest that they were inspired by actual events. What Michael presents to us isn’t preachy or suggestive it’s a tale of what could have been and that alone is wonderful.

Once again another reason why I am such a fan of “the little guy” who puts out their own work because it’s well crafted, thought out and executed and brings us back to a time that introduced heroes to the world through feats and deeds. While I don’t know where to find it physically it is available on Comixology and I highly recommend it.

Child of the Sun #1
Self Published 2015
Written by: Michael Van Cleve
Illustrated by: Mervyn McCoy
Coloured by: Jonathan Hunt
Lettered by: Leigh Walls

Summary: The Sea People bring fire and destruction during the bronze age to Egypt, Hatti, and especially to Canaan. But there is a prophecy about a child that will challenge them. A young boy with long hair that had never been cut… 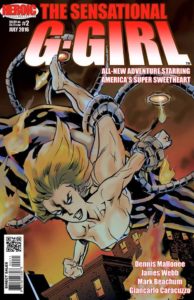 Summary: G-Girl now stars in her own series! After being turned into a girl and now going by the name Billi Jayne Jensen, she attempts to take back the power that was once able to turn her into the ginormous hero Giant while also coming to terms with whether or not she wishes to remain a girl or return to being a guy.

Review: This is awkward. I mean, sure if you want to make your spin-off comic an anthology book featuring many different stories about the same character that’s totally fine. I can get on board with that. However, when you start out your opening issue with a pretty solid set-up adventure that ends on a “to be continued” I would imagine you’re going to follow that story up immediately in the second issue, right?

Unfortunately, and confusingly, that’s not what happens in issue #2. The story of G-Girl in the strange jungle world surrounded by Olympians set forth in issue #1 – the story that I praised so highly in the previous review – is nowhere to be found in issue #2. Instead we get two different stories featuring G-Girl that aren’t really connected to one another and only further to confuse me on the timeline of all these G-Girl events that I’m supposed to be following.

The first story isn’t bad. I like the art quite a bit and I overall I enjoyed the story. It doesn’t have a lot of action in it except for the opening sequence with a guest spot by Flare, another hero from this Champions-universe, where her and G-Girl have teamed up to fight a T-Rex and purple alien Monkeys in suits. So pretty awesome superhero fair.

From there the story changes focus to G-Girl in her new pedestrian identity of Billi Jayne starting her new job as the secretary to dear old Uncle Donald who was named dropped in the previous issue. Not actually blood related, but prefers to be called that. Generally a man preferring to be called Uncle Donald could be set-up for a sexually creepy character however that’s not where Mallonee takes him.

Uncle Donald does have the hots for G-Girl, that much is apparent, but he’s business first and I found that really impressive as he impressively shuts down all of Billi Jayne’s advances. And I gotta admit, it was a lot of fun seeing G-Girl really try to own the office in a sexual way and falling completely flat all the way through the issue. Past all that there isn’t much else for this story.

The second tale takes place at a later time while she’s on a business trip with Uncy D, as a spacecraft begins wreaking havoc in the New York City. G-Girl attempts to take it out but is zapped and taken hostage. We get a short interlude of her brother hanging out with his friend scheming to make money off of G-Girl by posting nude pictures he secretly took of her on the internet, but the one female friend in the group nay-say’s the idea and tells the boys if they want to post any nude pictures on the internet they should be her’s.

Which, why? What is even going on with that subplot? Where did it come from and why is the one female character in that group, a group of children no less, eager to give up her innocence like that in order to make money? 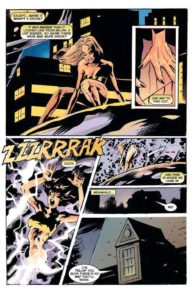 In every short story I’ve read featuring G-Girl’s little brother he and her have been on pretty good terms so I really don’t know where this development came from? And I swear if all of these stories and subplots are being continued or generated in other titles and not being advertised as such? Ohhh man. I will not be very happy.

We find out that G-Girl was taken captive by a mad scientist hired by the Women’s Cosmetic Industry – which is apparently a full business and not just a broad term in this universe – to be brainwashed to become their spokeswoman. Umm, that’s cool, I guess? Not really.

Overall the first story was pretty good but not what I wanted at all out of this issue. The second story was simply mind-boggling because of how disconnected it feels from everything that’s come before it. And while I would on any other occasion still give this issue a pass based mostly on its strength for this first story, I just can’t. Because issue #1 had a clearly defined main adventure it wanted to tell and I assume – as the reader – that adventure would have naturally continued into issue #2.

The sheer fact that it doesn’t makes this entire issue mind-boggling and I can’t forgive it for that. I hope that issue #3 picks up the story from issue #1, otherwise, I may just have to give this whole series a pass. Which is a shame. I really loved issue #1 and the promises that were made for future publications like this one.