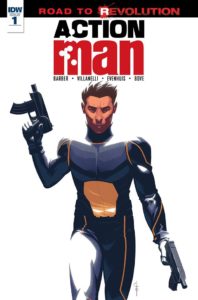 Review: Wow! That was really good. Like really, really good. Action Man was one of those toy/cartoon brands that I was aware of growing up, I had seen just a little bit of the 2000 animated series as well as I had one or two small Action Man toys, but past that I held no personal connection. Even to this day I was aware of the franchise still, but unaware until recently that IDW had decided to revive the hero for a new modern era in their new comic series.

With 3 issues published so far I decided to take a gander at it. The covers look awesome, I have an interest in the character, and I do love me some awesome super spy action. Plus I had heard about this interesting little crossover coming up called Revolution that tied together many of the Hasbro line of action-based characters. Transformers, G.I. Joe, Micronauts and Action Man. Among others.

I definitely want to see a crossover between the U.S.-based G.I. Joe series and the England-based Action Man. Much to my delight I was not disappointed with this comic as far as an opening story goes. I wasn’t sure what to expect going in after reading the synopsis, it felt strange to focus the series on Action Man’s protégé instead of the known man himself however Barber concocts a brilliant way to make the transition fluid and natural while also being entertaining and character engrossing.

The issue opens up with a prologue that feels exactly like a 50s poppy spy thriller where Action Man is simultaneously trying to save his sidekick Ian Noble whilst also attempting to stop the end of the world after Doctor X activates his doomsday machine. The adventure itself feels just right, like a Saturday morning cartoon when I was a kid and I was giddy as could be upon imagining that this was what the comic was going to be like.

The prologue art by Evenhuis is stellar and all the characters look like they come from the show Archer (or Frisky Dingo for those of you who know it). I was in love. But as the synopsis announces Action Man is dead and that’s exactly what happens at the end of the prologue.

Getting into the main story with the changing of art duties by Villanelli was jarring at first. I had completely skipped over the credits page so I wasn’t expecting the change. I quickly warmed up to it however and I couldn’t imagine a better fit for the series now. For the modern era Villanelli’s style isn’t exactly polished but it’s very kinetic and works well with both the action scenes and the smaller, silent scenes. Villanelli captures these characters wonderfully.

My biggest surprise was the finely tuned attention to characters. Ian is dealing with living in the shadow of his predecessor as well as everyone’s open animosity towards him, making him feel as if it was his fault Action Man is dead. He’s the new Action Man, a title passed down to those worthy of it, but he doesn’t feel worthy nor is he treated as such. He’s a great spy and action hero however, even if he tends to cause more causalities than the original ever did.

He has a couple of friends and teammates as well, some of which he gets along with just fine and a few who again openly treat him like garbage any chance they get. Each of these characters get their little moments in the story to show us why they’re important. This is all reason a nice breath of fresh air because any lesser writer would have contrived dubious reasons why any of these characters should fight with one another, but Barber is able to make every interaction feel needed and natural.

On top of showcasing how flawed Ian is as a main character and as Action Man through his ugly ways of succeeding in missions, to his struggle in identifying with the man and the myth of the original, Barber also throws in Ian’s outspoken search to find Doctor X whom he believes is only in hiding and not really dead. Though everyone else believes him to be. This opens up plenty of possibilities for the story to go as Ian must struggle to stay on task in his missions whilst also going off the books to further his own agenda.

Issue #1 ends with a nice little cliffhanger that sort of brings everything I talked about together and I can’t wait to see where it all goes in issue #2. I’m jumping into that sucker right now and you can’t stop me.
Final Score: 5 High-Flyin’ Spy Missions out of 5

Summary: ACTION MAN IS DEAD—LONG LIVE ACTION MAN! He’s the world’s greatest special agent… until he dies saving the planet, with all the world’s eyes on him. Now his young protégé has to step into the role—whether he’s ready or not!