I’m a fan of Insane Comics, I love that they put out these boo 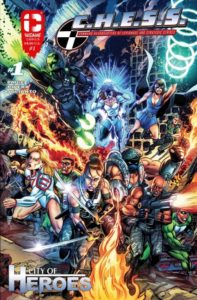 ks and for me this one feels kind of like a version of Infinity Inc meets G.I. Joe. The opening is good and it really kind of makes the action sneak up on you which I like. I mean it’s fun it’s different and as you see this woman running for her bus afraid of being late for work again well yeah.

We meet the Guild characters first and my only real kind of complaint is that their leader is too much Power Girl or as she’s called Valor. From the boob window to the colour scheme to her musculature it’s pretty damn dead on to me. Now onto the action I have to say what the guys do with the dialogue and the action scenes as we see what this team can do makes me think i’d like to see a mini-series with them, if there isn’t already on in my pile to read. It’s kind of hard to create new superheroes and I think they’ve done a decent job who they have on this team.

Our military style unit coming back see the smoke rising from the city and first thing ya do is go check and see what’s going on. What I thought was interesting to see and makes me want to see more is that they may be a good fighting unit but they aren’t exactly friends. Which shouldn’t translate to a good fighting unit but stranger things have happened and when everyone knows their role and does their job things get done. Strong characterization here helps with that too and thankfully we get that.

For two teams who don’t know each other and if there weren’t already a deadly menace to face they’d probably fight to be able to overcome that initial urge well it’s a great take. Sure they kind of get in each other’s faces, little game of “mine’s bigger than yours” happening but considering the leaders of these teams it was even better. The story is constructed nicely as we get to see powers, abilities and personalities emerge throughout all of this. It’s a nice introduction to both teams and ultimately leaves you wanting to know more about them.

The interior artwork could be more consistent. There are moment that are really impressive and others that are clearly either a victim of time constraint or just a result of not being used to doing interior work. However the fact that you can those really good moments means that he’s one to watch and as his work gets stronger it’ll be interesting to see how his style develops. It is a small press book with that look but it doesn’t do anything to take away anyone’s enjoyment for the book.

Definitely fun and loaded with potential this is worth a peek. Drivethrucomics has it or you can head to their website www.insanecomics.com and pick up a copy in either print or digital format!

Summary: On the way back from a mission the members of C.H.E.S.S. Strike Team (Command Headquarters of Espionage and Strategic Strikes) encounter epic battle going on in the city between an invasion of robots and a superhero team better known as The Guild. Seeing the Guild losing their advantage the members of Chess decide to use their strategic expertise to help out.