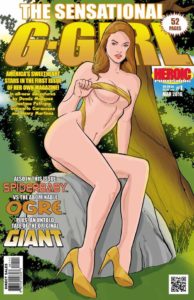 I’ll admit, I can find comfort in stories starring sexualized characters. Whether it be women or men, but as a straight male I generally gravitate towards women. But don’t take me for a misogynistic pig just yet, because it doesn’t matter how sexy that character you’re advertising is, if the story doesn’t hook me or end up being something that I deem “good” then I’m gone and I’m leavin’ your sexy ass behind.

However, with all that in mind, it shouldn’t be a surprise to you then that a lot of the initial reason I chose to read The Sensational G-Girl #1 is because of the cover. Much to my surprise the story exceeded what I was expecting and I walked away feeling completely satisfied by the experience. And not in more ways than one, it really was a good story with fun and truly interesting characters.

Focusing on the titular G-Girl who finds herself trapped in a mysterious jungle world being escorted by other scantily clad female warriors who have been elected to take her to this world’s ruler, Petrigno and Mallonee then chooses to give exposition through pages of walking and talking and very little action. And I’m okay with that because here the exposition feels very natural to the predicament G-Girl finds herself in. Through conversation with these other characters is the only way for her – and us – to figure out what’s going on.

It’s also a great way to recap the story thus far for our heroine as you find out that not only is this story a spin-off of another indie superhero comic titled Champions, but also that G-Girl herself is a male character from that series named Giant who once had, well, the ability to grow giant, and has since been turned into a woman. Leading to an adventure where G-Girl finds herself not only looking to get her stolen powers back but also wrestling with her own feelings and identity because she still hasn’t completely decided on whether she completely likes being a woman or not. Although all signs point to yes, she prefers being a woman over being a man.

There are several short stories in the back of the first issue ranging from a straight up recap of everything that has happened to Giant and G-Girl since before the first issue, to other stories featuring G-Girl to not only learn how to be a female hero in hero own right but also begin to learn what it’s even like being a woman. There are other stories as well focusing on other characters within the Champions universe.

These stories generally range from pretty dang good to meh inducing experiences. Overall though the full package of issue #1 is a runaway hit for me. Petrigno and Mallonee have me invested in these characters and intrigued by their backstories as well as their futures, especially when it comes to G-Girl. On top of that I was able to jump into issue #1 and I never felt lost once not having read any other Champions stories in this universe.

The art is also gorgeous, and that’s a pretty consistent thing throughout. Even in the extra stories in the back. Petrigno’s art is sleek, popping right off the page with a heavy dose of pin-up as well, and it never feels flat. The characters are all gorgeous. I could stare at any of the pages for hours because I love what I’m looking at. It’s all rendered in such detail. I can’t wait to see him tackle action scenes which the cliffhanger for issue #1 seems to promise for the next round. 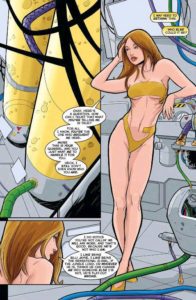 If there’s anything I could say issue #1 should improve upon or that I didn’t fully care for is being given such a heavy dose a quality only to not see the exact same followed up with all of the stories in the back of the book. Stronger consistency throughout the various stories would be great for an overall greater experience. Other than that, not much for me to complain about.

Summary: G-Girl now stars in her own series! After being turned into a girl and now going by the name Billi Jayne Jensen, she attempts to take back the power that was once able to turn her into the ginormous hero Giant while also coming to terms with whether or not she wishes to remain a girl or return to being a guy.