Comic book stores still have one week to send in their orders for November-shipping books, so here are Scout’s offerings, including the hottest book of the fall, FISH EYE, already being called DIE HARD meets THE TRUMAN SHOW!!

FISH EYE #1
Written by Massimo Rosi
Art by Stefano Cardoselli
Full Color, 32 Pages, $3.99
Travis is a cop. And a family man. And he’s the star of a reality show that follows his police exploits in his small town. The only problem is that ratings are slipping. When a group of killers target Travis, the small town cop must go to war to protect himself and his family, while trying to figure out who’s really after him. After all, ratings are king, no matter who gets hurt… or killed.

GIRRION #2
Written and drawn by Tom Lintern
Full Color, 32 Pages, $3.99
The hottest new all-ages book continues!!! GIRRION is a sweeping sci-fi fantasy story of a hero’s journey in a distant world in a distant time, a saga told through the eyes of Jarra, a poor factory worker who dreams of escaping his world of endless toil. His wish comes true, though not in a way he would have ever wanted, when his city is attacked by a dark entity called the Halodron. He escapes the conflict, but only to be thrust into a war of other-worldly magic and weaponry! 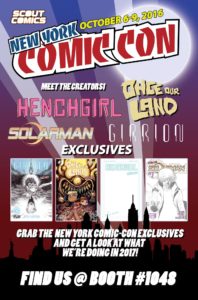