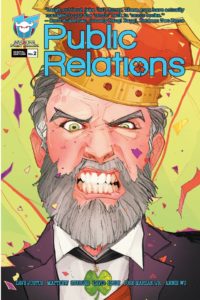 that’s okay better late than never right. Thankfully the fine folks at Devil’s Due/1First Comics have given me the run to review so I can share how delightfully unpredictably wacky this book is! I mean that in the most fun flattering way too. This is definitely one of those titles that you want to read to feel good, smile and have a little chuckle.

Right off the bat here I was kind of laughing I mean it isn’t very often you hear someone especially in comics referred to as “a world-class pedophile.” I mean if you’ve read the first issue you know that doesn’t describe Dan Clover at all so it’s kind of funny. Though I have to say the whole idea of a slander campaign like this regarding a King’s son does sorta fit.

Usually when you have a then and now approach it can get a little overwhelming for a reader but the guys here do it pretty well. It gives us a chance to see how the now has been set-up so that we as readers get a better understanding of these characters and the world they inhabit. The way we get to know these people through the story, dialogue and characterization keeps us guessing about their true intentions and actually throws a wrench into what I think is going on.

I have to say one of my favourite scenes this issue is the two page spread that Dan refers to as close as one can get to his Senior Prom. The composition of the page and the creativity involved in representing so many people, species and characters is wonderfully done.

There’s so much going on here it really is a huge delight to see how quickly things escalate into almost utter madness. The King, Dan’s father, seems to have gone nutter and the ramifications of that are only now beginning to be seen. There’s so much in the middle of what’s happening now and what happened then still left to uncover that it really does a perfect job in getting the reader to WANT to come back and find out what happened.

The story progression, characters, characterization and situations they all find themselves in is ridiculously fun and easily relatable to. I mean c’mon how many of us think our families are crazy and the source of all our ire? This just kind of takes that to the extreme and it’s done in such a fun and strong way that this is going to be one of those books you’re going to read time and again just for that feel-good feeling it gives you.

Summary: The book your cool friend calls It’s Always Sunny In Westeros is back for its sophomore slump! Dan gets dressed for the big party! King Clover visits his therapist! Threnody takes a shower! A wizard drinks absinthe ironically! And… you won’t believe the shocking identity of the dragonslayer! (It’s Chip.)