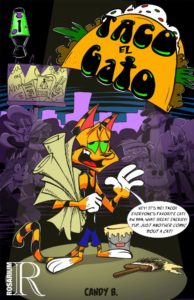 And a very fine ole! To ol’ Taco El Gato and his creator Candy Briones! Gotta say I’m liking what Candy’s done here with this little world of her’s. In a town that has cats and dogs living in it you think they all woulda learned to get along pretty well by now! But not so unfortunately! Of course for Taco, he seems to get the worst of it from both sides. Could be on account of how freakin’ cool and laid back he is compared to everybody else! As no way can it be cause of his rather unique parentage! Though he does seem slightly naive but I have to wonder if that’s all just an act to hide any sort of pain he might have over his treatment since he knows saying anything isn’t gonna do him any favors. Whether or not that’s an actual thing remains to be seen and I look forward to seeing if it is possibly the case. Taco’s relationship with his brother is also quite complex and a bit saddening.

But the fact his brother apparently never lets things go too far says that at least some part of him does care. Even if he doesn’t want to admit it. I know I certainly love Taco’s relationship with his little nephew! I kinda wonder if one character in this who is looking for his kids is actually based off Leo from That 70’s Show? He certainly has that vibe to him in my view and makes for some enjoyable scenes with him despite the relative shortness of them. The fact Candy does all the work on this title is pretty great and I can imagine time consuming as Hell too. But the fact she’s clearly put effort into this shows she cares a great deal for her project and is more than willing to put in the effort despite the amount of time it takes instead of half-assing it. Taco El Gato is off to a great start and I can’t wait to see what happens next. Especially whenever a little action of Taco’s comes to light. Which hopefully doesn’t get him into a great deal of trouble!

Editor’s Note: Interested in checking out this awesome little title for yourself? Head right over here!