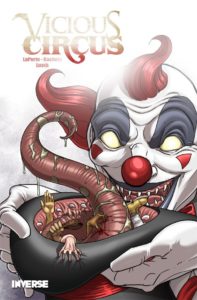 I’m not gonna lie, this book done gave me another reason to feel creeped out by freaking clowns and not wanna like ’em even more. Kevin LaPorte certainly did a good job in conveying the creepy aspects of the clowns in the writing while Amanda Rachels did a fine job in the art area in making their looks match the creepy actions they do. Nathan Leuth’s colors matched perfectly as well in my view. Sure, these clowns might have good intentions where abused kids are concerned but considering the way they go about it is some straight up horror film styled stuff and I’m liable to have a nightmare or two when I go to sleep later tonight now cause of it. This would make for a fantastic horror film adaptation and those who love killer clowns would more than likely love the Hell out of this! Course for me, I would probably avoid watching it cause I’m a pansy when it comes to horror films. And the whole madness of this all begins when two good little friends are out in the woods together.

One of whom is out there to avoid his piece of crap daddy while his best friend is trying to get him to go with her and tell her mom. And it soon becomes clear sometime later that Melvin’s daddy ain’t the only piece of garbage in Dusty Gulch, Kentucky. A place I don’t think I would ever want to go too, and the same as well for Clown Town! A guy named Ruffing is clearly a hypocrite who is quite possibly heavily in denial about his little kid fetish. Little Chelsea, Melvin’s best friend pretty much, is certainly gonna need therapy after all this! But one has to admire the fact she was so damned willing to brave the horrors of Clown Town to rescue her best friend at the cost of her own life! A life that would have been forever changed by the force behind Clown Town had the residents gotten their way. A way they thankfully didn’t get and how things go in the aftermath is anyone’s guess. 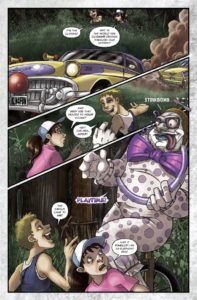 Though I have to wonder what exactly Chelsea’s mother may have done to warrant her being forced to throw a knife at her own daughter that would determine her new clown form! This was a fantastic if creepy read that I didn’t want to stop reading til I got the finish line and I think those who pick this up will have the same thing happen to them as well. Kudos to the team for putting this GN together and making me wonder if whether or not I should be rooting for these scary ass clowns!

Editor’s Note: Interested in taking a read of this for yourself? Head here if you dare!

Summary: Clown Town. Where killer clowns are avenging spirits for abused children. Where abused children meld into the carnie masses, masked by twisted inner faces. Where young Chelsea Schroeder is left to her own devices in the search for her lost friend, Melvin. But Melvin may already be a part of the dark circus, simultaneously its beneficiary and its victim! And Chelsea may soon join him, unless she evades the clowns who just may be her saviors!