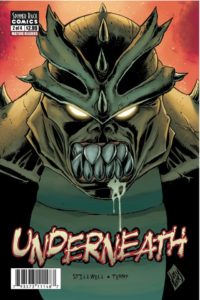 We open this issue back in 1871 and see how prolific the Trolls were back then. We also get a glimpse at history here too. Still it’s a demonstration, or tale from Joe to Terry as they pass the night away on the lookout for Trolls. I do like this as it has this whole alternate history thing to it alongside the fact the homeless who are often overlooked may have these complete lives you know nothing about. It works to everyone’s advantage in this story but it does make you think about real life. Also a city below the city, we all know they exist in most major cities, abandoned, forgotten and used by the homeless and disenfranchised it’s something else I like about this it’s a good reminder when you think about your own life.

Here we meet a whole new set of characters and they are wonderfully portrayed. I like Wojtek and whatever language that is I’m a fan it looks cool on the page and yes I used google translate and it makes no sense but are words so kudos on that. But a big blonde hairy Slavic type in overalls with no shirt yeah maybe i’m prejudiced.

Not everything underground is as it seems. We meet another character who tells Terry, and by extension us, about the Troll homeworld and what it’s like there. We also learn a few things about life down there and I gotta admit Tom does a great job fleshing out the story, giving us background and enlarging the cast of characters. This really is a well crafted, executed and thought out book. The characterization is strong and the flow of the book is equally so, there’s little to nothing to dislike about what we get here.

So while a team is going topside to search for a missing boy we see what the Trolls are up to. We saw a little of this last issue but this time around it I’m not sure if they are working with or trying to set up a local gang. Either way this not only broadens the Trolls reach but actually protects them during the day and should be a surprise for the group. It’s a great way to throw in a great plot twist.

Jim and Rachelle do some nice work together here. JIm’s got a pretty good eye for detail and his creativity should be noted. I like his depiction of Lower Chicago, the Trolls and the everyday folks. He utilizes pages and panels nicely for the flow of the story. Plus the violence is violent without going overboard. With great expressions and a good ability to show emotions throughout they make this fun to read.

Well this is certainly living up the company name. It’s the kind of book you see and get excited for like when I was a kid at the corner story and spotted that Spinner Rack.

Summary: We met Terry Kirk, an arrogant lawyer who was accosted by trolls while crossing a bridge spanning the Chicago River. Enter Joe and Clarence, two seemingly ordinary homeless men who slay the monsters and tell Terry of the secret war they wage against the Trolls. Terry tries to move past this incident until a troll attacks him at his apartment. He finds killing the troll with a baseball bat to be an experience to remember. Terry seeks out Clarence in hopes of joining their efforts to combat the Trolls and have some serious fun. 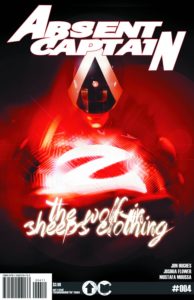 Summary: The team has finally begun to compose themselves after the death of their leader, Captain Zero. A talk between Insight and a top level Zero Technologies executive prompts her to reveal her identity to Pulser. Just when they think that they’ll be able to pull themselves together and move forward, the new CEO of Zero Technologies is about to turn their world upside down…

I really am greatly impressed with what Jon is doing with this series. His story is very solid and his characterization is ever evolving and growing making these characters as real as possible. Plus he keeps putting these characters through their paces in a seemingly never ending barrage be it in their personal lives or out in action.

There’s something to be said for shocking the reader with unexpected turn of events but when those same actions shock the very team we’re reading about well you know something big is going down. This press conference that Angelica Argos the new CEO of Zero Technologies, who has something of a past of her own, with Captain Zero is chock full of delightful surprises for everyone! By opening things up to the selected members of the press we get a great opportunity to not only see her in action but the responses of the team, the public, okay media, and the police. This is a very well crafted segment. 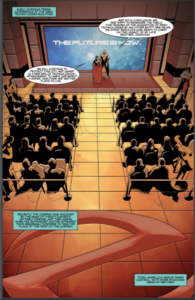 While this takes up most of the issue fear not because the amount of characterization and what we see, namely to Rhapsody, keeps things set up nicely for what’s coming next. The little reveals, the betrayals and even this mission they have to leave the press conference for all smack of something else and it’s the intrigue behind that which has my attention. Well okay that and the new characters both good and bad, well I wonder if any are good, raise more questions that you realize. So whatever is going on with Insight well that’s going to be something I can’t wait to discover.

The interiors here are extremely good too. I love seeing Rhapsody because she’s so different and that we get to see her tattoo’s clearly, cross on the right shoulder for instance, and such detail is the kind of attention that makes this stand out. Though consistency would be nice guys so watch out for forgetting where they are supposed to go. When she’s threatening Angelica she doesn’t have any is the example. There’s definitely a unique style at play but it’s good and makes the characters interesting and the pages and panels flow nicely.

Overground has me as a firm fan. The writing is spectacular and coupled with strong interiors this makes me happy. It also shows you can have darker issues in a series without having to fall into some cliche traps.