Universal Television, Depth Of Field, and Black Mask Studios are going out to directors with a drama TV series based on the forthcoming Black Mask comic SINATORO by Grant Morrison and Vanesa R. Del Rey from a pilot script by American Odyssey and Heroes’ Adam Armus & Kay Foster and Morrison. Depth Of Field’s Andrew Miano, Chris Weitz, and Paul Weitz and Black Mask Studios’ Matt Pizzolo and Brett Gurewitz will executive produce with Armus, Foster, Morrison, Kristan Morrison and Adam Egypt Mortimer. The team intends to partner with a director and then take to buyers with the studio.

The comic book series SINATORO tells of a soldier on a strange mission that takes him into a sinister landscape of American mythologies, melding the Tibetan Book of the Dead with the Great American Road Movie for Morrison’s masterwork on Life, Death, and America. Armus, Foster, and Morrison’s script is a faithful adaptation of the long anticipated work that has been a passion project of Morrison’s for years.

According to Morrison, “Sinatoro reimagines American pop culture as a whole new mythology. It’s about life, death, sex, romance and everything in between. This is one of my favorite stories and I’m excited to see it finding new life as a television series where we have more opportunity and potential to develop the ideas and characters.”

“Grant, Mortimer, and I have been discussing SINATORO since as far back as 2012,” said Pizzolo. “The question was always how to build a canvas big enough to faithfully encompass the brilliant world Grant had envisioned. This has become a shared obsession over years with more and more creative collaborators falling in love with Grant’s vision and diving in to help build it. Bringing on Depth Of Field and finding the incredible Adam and Kay were the critical components that finally brought this mad vision into reality. It’s a true blessing to get to work with such a world-class team on such an ambitious adventure.” 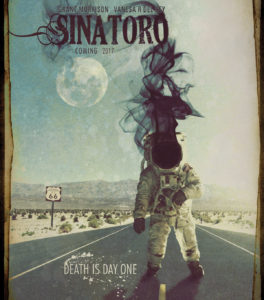 “This has been a fun one,” said Miano. “To be able to spend a few minutes inside the brain of Grant Morrison is a treat. I’d recommend it to anyone. We were lucky to land Adam and Kay and the three of them meshed so well. I can’t wait to see this show.”

“Kay and I were so excited to delve into the rich world of Grant’s imagination,” said Armus. “We took to the material immediately!”

“I’ve been working for years to help bring to light Grant’s incredible pop art vision of the American Dream’s end,” said Mortimer. “So excited to have found these amazing creative partners in Armus, Foster, Miano, and Pizzolo. Death is the new black!”

About Black Mask Studios
BLACK MASK STUDIOS, the publishing/production company launched in 2014 by Matt Pizzolo (Occupy Comics, Halo-8 Films), Brett Gurewitz (Bad Religion, CEO Epitaph Records, ANTI- Records), and Steve Niles (30 Days Of Night), has quickly made a name for itself as the hottest launchpad for emerging comics talent as well as home to some of the riskiest, most provocative comics from fresh new creators and living legends. After a banner 2015 with breakout hits We Can Never Go Home, Space Riders, and Young Terrorists, Black Mask has already doubled down in 2016 with beloved new series 4 Kids Walk Into A Bank, Kim & Kim, and the forthcoming Black. Black Mask currently has numerous film/TV productions in development including previously announced projects Mayday with Imperative and The Disciples with UCP. Black Mask’s next book The Forevers will debut in August 2016.