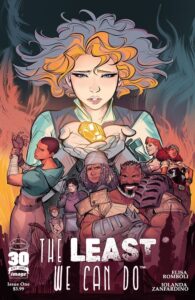 The team behind the Image Comics miniseries A Thing Called Truth, Iolanda Zanfardino and Elisa Romboli, are back with a brand new offering. The Least We Can Do heads to dystopian London to answer the age-old question, ‘What if you put The Hunger Games, X-Men and Final Fantasy 7 in a big bowl, and then poured a nice cold bottle of social justice all over it?’

Set 40 years after a great war known as ‘The Creation‘, which robbed mankind of all that wonderful technology that has us anxiously fidgeting through the night, the story is driven by ‘Medium‘, a magical power that many believe could help to rebuild civilisation into a peaceful, thriving paradise. Of course, nothing as wonderful as Medium, or The Force, or Game of Thrones, can ever be allowed to exist for long before someone comes along to ruin it, and so enter The Eden Army to form a military dictatorship and forbid the use of Medium by commoners.

Nothing is harder to nail in a first chapter than the right amount of worldbuilding. It’s too easy to get bogged down in folklore and rob the reader of action, or go the other way and leave them confused. In my graphic novel, Luminology: The Mark of the Soul (now available on Kickstarter here,) we edited our socks off until the book was as tight as a teenage pair of jeans after a steak dinner. This takes a lot of discipline and for The Least We Can Do to feel so slick, I’ve no doubt a strenuous shredding process took place, leaving behind a first issue as flab-free as Wolverine and twice as hairy.

The first issue of The Least We Can Do opens with our petite, hooded protagonist, Uriel, stealing some Medium from a sword on display in her family home as she takes a vow of moral subjectivism, swearing to always do what she thinks is right. Abandoning her aristocratic family (think richer than the Kents, poorer than the Waynes), Uriel goes to meet The Eclipse, an underground rebel group who have secretly mastered the use of Medium, and hope to one day use it to overthrow the military government and free the people at last. Their devil-horned leader, Seth, takes a shine to Uriel, and introduces her to the team, who don’t take too kindly to being partnered with a Little Red Riding Hood lookalike.

The influence of Final Fantasy 7 in particular is readily apparent, whether it be the similarity between Medium and Materia, the way Camden Lock resembles a run down corner of Midgar, or the fact that Seth looks like Barret Wallace from FF7 and Satan both stepped into the molecular transporter from The Fly at the same time. However, Zanfardino and Romboli don’t ladle it on too thick either and, so far at least, The Least We Can Do offers enough of its own merits to stay firmly in Homage City rather than Plagiarism Land.

From the first issue alone, it’s clear that this series is going to contain a boatload of biblical references (sorry, ‘ark-load‘), ranging from the non-ambiguous ‘Eden Army‘, to cryptic references to bible passages about pigs wearing pearls, to the fact that Uriel is also the name of an archangel who, in John Milton’s Paradise Lost, accidentally leads Satan to Earth (perhaps those devil horns on Seth’s head are even more ominous than they first appeared). Depth like this, for me, can make or break a comic.

Finally, the artwork looks great, with frame after frame expertly laid out, and colours as crisp as a poppadom and popping like a break dancer. My favourite moment in the issue is when two members of The Eclipse jump inside an old London telephone box sitting atop a trap door leading to their hideout. Doctor Who fans might get a sense of nostalgia here but for me what was special about this moment was a simple but incredibly effective bit of panel work, in which the panel itself gave the impression of dropping with the phonebox and taking us, the reader, down with it. Hats off to whoever came up with this as it’s moments like this that give me hope that Zanfardino and Romboli can really do something special here.

Summary: Mysterious magical power arises from a world nearly destroyed by war. A young woman fights for her ideas of revolution and to build a new society from the debris. Realizing that she can’t do it alone, she has to prove her worth to the Eclipse Rebels to join them against the dreadful Eden Army.

A story of discovering what is right and what love means in a military-occupied and socially oppressed United Kingdom.