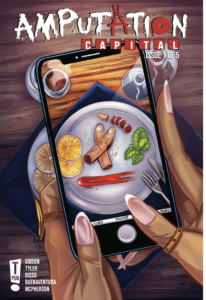 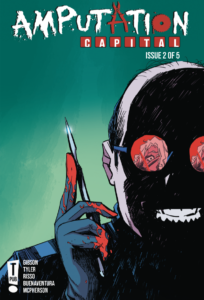 He has no problem convincing actors with waning careers to sell their body parts to his company, Skin Deep. His biggest purchase yet, the ring finger of recently divorced superstar actress, Morgan Mainor—a great victory, until a group of anti-skin activists called the Phantom Pain Project pay Alfie a visit, kick his head in, and force-feed him the two-million dollar finger on camera. 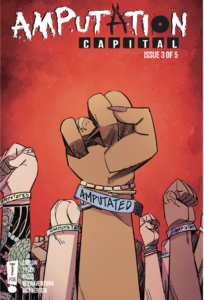 “TPub was one of the earliest adopters of GlobalComix, and has been an incredible partner since,” said Christopher Carter, CEO and Founder of GlobalComix. “To have the opportunity to contribute to the launch of Amputation Capital is humbling and speaks to the faith Ray and his team have in GlobalComix. We can’t wait to see how fans react to this unique entry into TPub’s catalog.”

“I couldn’t have had more fun making this book with Neil and Andre,” said Raymond Tyler. “Previously working as a marketing influencer sparked this idea—the satire of professional managerial class and celebrity exploitation, about how we play certain roles in society and how those roles are unnatural ways to make ourselves more marketable. In Amputation Capital, characters aren’t just buying and selling ‘products’, they are the product.” 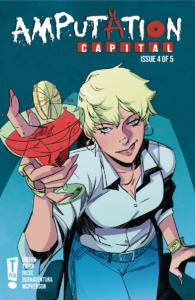 “It was really cool experience working on Amputation Capital, cause it was out my comfort zone,” said Andre Rizzo. “I tried to put most of my storytelling through expressions and body language focusing on the concept of how much are you willing to sacrifice to get famous and the ruthlessness of what power could do to you depending on which class position you are, and I hope that it works out well!” 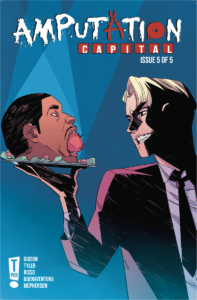 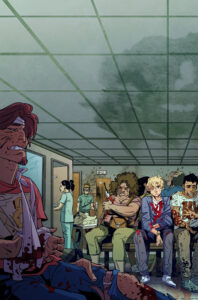 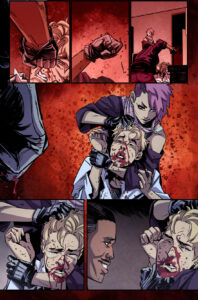 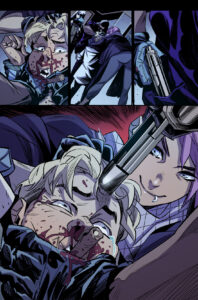 GlobalComix is a digital comics publishing platform that enables comic creators and publishers to upload, publish, monetize, and translate their content to a global audience in multiple languages. Headquartered in New York, GlobalComix is a private venture backed startup led by a team of comics and software professionals.