I had the unexpected treat recently of getting to check out Jasmine Silva’s Graphic Novel; Through Your Lens. An LGBTQ+/POC Romance tale between our main Gal Elena and a new friend she meets by the name of Tala. Now its not all in your face and is in fact, quite the Slow Burn and I for one, rather like that. Nicely enough, this GN also is also essentially a way to help one with inspiration if they are needing it since Motivation and Inspiration are some of the big factors running through this book. You’ve got Elena, an aspiring Film Director who’s about ready to give up on her Dream following some problems she had with her friends that also double as her Film Crew. Then you have Tala and her aspirations of becoming a Writer and thanks to Elena’s attempt at trying to sell off some of her Equipment, they end up meeting and its essentially a match made in Creation (Failure to Pun?) so to speak. There’s also Gabe, Elena’s Cousin. Who primarily serves as her major source of Support through out the book.

And I love the relationship between these two a great deal as it just feels real to me and part of that may be due to Jasmine’s own experiences with Family. Or at least her desire to include/explore the theme of Mexican-American Heritage in her works. Either way, it works for me. The awkwardness between Elena and Tala is seen through out a lot in Through Your Lens but it doesn’t take away from anything in my view. It can be seen as somewhat amusing and is an every day aspect that a lot of us deal with in various ways and may even be a little aggravating on occasion. But the awkwardness doesn’t stop these two girls nicely enough from bonding to become friends and even wanting to work together to do more with a story of Tala’s. Which ends up helping with an issue of Elena’s where some friends are concerned. Even if I did feel like it was handled way too quickly but perhaps Jasmine felt it was for the best to handle it in the way she did. 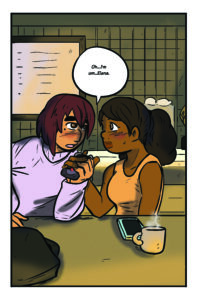 I also had a minor issue with speech bubbles but ultimately, that’s more on account of me reading this digitally and doing a scroll down of each page instead of with a print copy and each page being next to each other. But again, that’s ultimately a minor issue. I liked that when Jasmine finally gave our two Gals a big moment, she didn’t choose to go in what might be seen as a cliché route and allows for Gabe’s support role to be that much more vital. I could go on and on about this book but I’d be spoiling things and its the last thing I want to do. But I would highly recommend this for anyone in need of some Inspiration/Motivation and more LGBTQ+/POC content in their lives and just generally looking for a good story to read over all while also getting an important reminder that you should never give up on your Dreams.

I’m glad Jasmine reached out to me as this may easily be a top read for me in 2022.

Editor’s Note: Interested in checking out more of Jasmine’s work in addition to Through Your Lens? You can visit Jasmine through her website here while visiting Amazon for a Print Copy or through here for a Digital Copy!

Summary: Ready to give up on her dream as a film-maker, Elena puts her cherished equipment up for sale. Completely giving up, she starts to work with her cousin in a modest convenience store, resolving to accept this fate.

Whilst selling her once treasured filming equipment, she comes across a young, optimistic writer called Tala. The connection is instant between the two dreamers and they soon realize they can help each other achieve their visions.

Now a duo to be reckoned with, they decide to take the film world by storm, entering their project in the film festival. Yet, can Elena apologize for past mistakes? And can Tala create a story truly unique?

It’s a path of struggle and hard work but will distraction keep them from their goal?