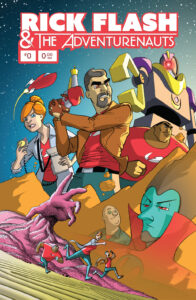 As fate would have it, I managed to come across Rick Flash & The Adventurenauts on Twitter without meaning too. But you know what? I’m glad it happened because this book was an incredibly fun and even goofy read from start to finish. RFTA is essentially an inspired 1950s style Science Fiction (and sitcom) era inspired book and even with my limited viewing of that era, the book captures it really well. Marshall Litchfield, Scott and Mark Pate all clearly had fun writing this story as we see Rick and his team deal with giant hands, ship eating bugs, quests for needed parts, and giant evil robots who may just really need a hug at the end of the day. Oh, and can’t forget all the stories Wrench tells about his ex! Those are certainly fun! Though we mostly see him tell these stories to Jerry through out the book, who’s actually an Alien Brain who can look Humanoid! His responses to Wrench’s stories are amusing and doesn’t feel like he’s being sarcastic at all but I could be wrong.

Now, I have to wonder if Wrench’s ex is really all that terrible or if Wrench himself is just that immature. From the looks of it, I kinda feel its the second one but at the same time I’m trying not to take the book too seriously as its not meant to be taken that way and for all anyone knows, he’s just making up these stories to humor Jerry. Part of the tone of the book that includes not being meant to be taken too seriously would definitely go a long way in explaining Castleby’s apparent fixation on wanting to take his shirt off when things get wild. And I think is just a nod in general to the male loses his shirt when things go wild trope. Of course I could always be wrong! I could go on and on about Rick, Castleby, Bunny, Wrench, Jerry, and the Robotic Grandma and the zanyness of it all but I’d rather not. 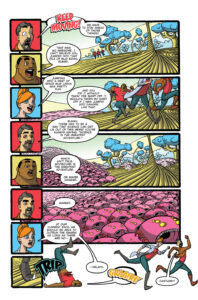 As that would ruin the enjoyment for the rest of you and that’s the last thing I want to do. RFTA was a great way to be introduced to Litchfield and the Pates and I am looking forward to more of their work. Whether that’s on RFTA or another book entirely. However, it does appear that RFTA is digital only for the time being but please, don’t let that keep you from checking out the book!

Summary: Rick Flash and the Adventurenauts is a sci-fi sitcom set in a 1950s style science-fiction universe where rocket ships can travel the length of the galaxy, robots are an everyday threat, and each planet is filled with danger and intrigue.

In this first exciting adventure, Rick, Castleby, and Bunny begrudgingly help save a town from a robotic menace while Wrench tells Jerry about past romantic woes. 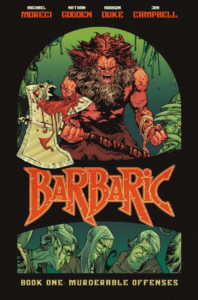 Summary: Owen the Barbarian is under a witches’ curse to make amends for his murderous past. His bloodthirsty talking Axe is his moral compass. And he’ll do whatever it takes to do good, even it if it means cleaving a few skulls. Even if it means helping a witch.

OWEN THE BARBARIAN HAS AN AXE. AND HE’S GONNA DO GOOD WITH IT IF HE HAS TO KILL SOMEONE.

Owen the Barbarian has been cursed to do good with what remains of his life. His bloodthirsty weapon, Axe, has become his moral compass with a drinking problem. Together they wander the realm, foredoomed to help any who seek assistance. But there is one thing Owen hates more than a life with rules: Witches.
Welcome to the skull-cracking, blood-splattering, mayhem-loving comic brave enough to ask: How can a man sworn to do good do so much violence? Hah! F***ing with you. It’s just…BARBARIC.

Review: I… I just really love Barbaric, you know? I mean… You guys saw/read how much I enjoyed the first issue awhile back so it should be no surprise. But if you didn’t, at least you’re seeing my enjoyment now so that’s something! Its a great, wonderful title that I’m saddened ended its first arc at three issues instead of like 5 or 6 or some such like that. But life is life as it likes to be at times and we could definitely use Owen and Axe to kick the crap out of the bad decisions it keeps harping on us. But enough of that and on to more happy things and such! I loved that Michael in the second issue completely went in the right direction instead of the left, happily continuing to subvert whatever expectations there may have been by having Owen, Axe, and our gal Soren (the girl we met in the first issue) chilling around in the local tavern instead of dealing with the funky Demonic Cloud. Well, maybe not so much chilling in Soren’s case but Owen and Axe? Oh yeah! Its just not what you expect and I really liked that a lot. Our gal Soren as we learned in issue 2 is a Necromancer and that’s kind of made her an outcast. 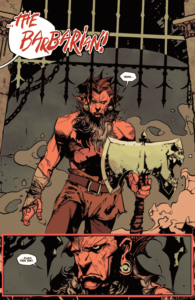 Something Owen and Axe can no doubt relate too but Axe probably wouldn’t see himself as one! Or if he did, happily own up to it as loudly as possible! Even if no one else aside from Owen and Soren could actually hear him do so! We also got to learn that she tried to get some help where her Necromancy is concerned from some Monks but ultimately… Ultimately this unfortunately doesn’t go that well. Primarily ‘cause the Abbot is a little on the bad side of things and seems to take issue with the all wonderful Light. Something that when I was reading through issues 2 and 3 again before writing this, made me think of the Farscape episode ‘Crackers Don’t Matter’ that introduced the blind character T’raltixx that had some apparent issues with the Light. Sadly we never got any follow up on that storyline on the show or in the comics as it would’ve been interesting to see more of his kind pulling more shenanigans. But enough on that and more on Barbaric!

Another thing about turning expectations upside down with this book is that I’m glad we didn’t end up with some kind of mutual attraction being developed between Owen and Soren. Though again, Michael only had so much time and story to tell so its possible in the second arc and potentially beyond that he might go there. But if he doesn’t, that’s absolutely fine as something like that’s not needed. Mutual respect and friendship is definitely something to have develop! Soren herself all too easily could have ended up dead as one way to go against expectations considering how things go for a bit there for her once her, Owen, and Axe start looking into the Demonic Cloud and the possessed Monks. But she doesn’t and instead, gets a bit more powerful as we see in the third issue while Owen and even Axe are kicking butt and getting drunk even as things look pretty darn dicey here and there.

Going against and turning expectations upside down is fun and I think its one of the things that makes Barbaric so damned appealing and was in a lot of 2021 top comics lists for good reason(s). 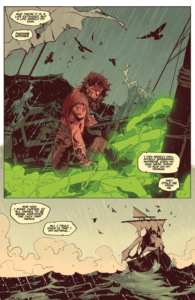 Michael, the team, and Vault have a definite hit here and I am looking forward to continuing to see that keep going. We’re teased with Vampires after our valiant (or something close to it in Owen’s case) heroes save the day and keep the Lights on and I can easily see Michael switching up gears when the next arc arrives so that we’re greeted with something else being done instead of Vampire ass kickings.

I’m especially curious as to what Soren was hinting at during her Read of Owen at one point that she couldn’t fully figure out. Something Owen himself doesn’t want to talk about and clearly means it has a lot of importance for him. With that all said, Michael? Vault? I’m ready for that second arc!