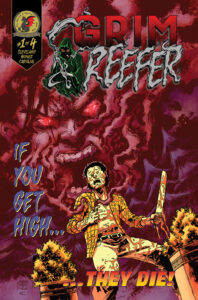 When I had the email for Grim Reefer hit my email address recently I knew I had to check it out as it sounded pretty promising and fun to read. And I had sworn I had heard of it sometime ago so I chose to check out the book since the premise reminded me quite a bit of the Wu-Tang’s How High film from back in the day. Only, instead of a body being cremated and the ashes being used to smoke to get through College, its a bit more different than that. Now unlike the characters Method Man and Redman played in How High, Grant is not the most likeable guy ever and you’re not too sure about Marty either. Or at least I’m not at any rate given how he’s acted so far and certain view points of him. But at least he’s not as bad as Grant is so that’s something at any rate. And I have to say, I love the Cops in this comic, even if a few of them do have bad judgement and there being the consequences of that. Something I’m glad to see Thacher E. Cleveland not shying away from either as it wouldn’t have made sense otherwise.

For Burt, this experience with Grant will no doubt serve as a lesson for him when it comes to doing as told. I enjoyed the work put in by Claudio Munoz and Kote Carvajal and I look forward to seeing their work again in the future. Whether its the next issue of Grim Reefer or elsewhere. I’m especially looking forward to seeing how Thacher explains how Grant and the later established Weed Farm mix like they do as it doesn’t seem like Grant’s the type to deal with Magic. If anything, he’d probably think of it as Hippie stuff and deride it like he does the Police, A-Holes (which is ironic cause he himself is one), and Germans. This was a fun first issue that went against all expectations I had going in and that for one makes me happy. Grim Reefer is also definitely not for kids so be sure to keep that in mind when picking this up due to its foul language and violence. It should also be noted that Grim Reefer had a successful funding on Kickstarter back in December and looks to currently be only available in digital format outside of what was offered in the Tier Rewards.

Editor’s Note: Head here for a copy of Grim Reefer!

Summary: When a marijuana crop is grown where a violent criminal was killed, anyone who smokes it gets possessed by his revenge-driven spirit!