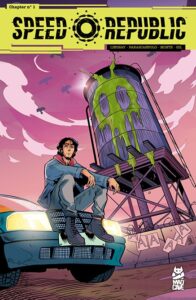 Take Cannonball Run, Mad Max, and perhaps a dash of Death Race and you’ve got a Post Apocalyptic world set in Europe in the future in the pages of Speed Republic. Which, honestly? Having it set in Europe is definitely a different twist compared to these settings usually being somewhere in good ol’ America and its just really nice to see a different Country be shown here. Even if the state of things isn’t necessarily the greatest and why that is is a mystery. One we don’t necessarily need to learn about just yet even if there are some questions I have about a few things but I’ll get to that in a bit my friends. I promise. Now in this world of Ryan K. Lindsay’s, we have Europe united (But is it really?) under one man known as the Autocrat, whom we don’t know much about and is either liked or not liked at all. This guy keeps the masses distracted for the most part with these races through Europe but said races aren’t necessarily the safest. Meaning you need a certain kind of moxy in order to be a racer in these races as being involved could very well mean the end of your life in some way or another.

And our boy Sebastian Valencia has chosen to take part in the latest race. Not for fame or glory but to make up for his wasted past, a little of which we get to see in this first issue. Though the fame and or glory stuff is entirely something he could want if it meant he’s now made up for his wasted past so that his future can be a little more happier. Granted, how well that would be received in the eyes of those who know him is an entirely different matter. And perhaps we’ll see that if our boy ends up winning the race. That is… If Family doesn’t have something say about it first and I am curious on their motivations for why they are in the race and how close Sebastian is with his questions on said motivations. Now while this first issue is something of a slow revver (I got puns, weak as they may be), it still nicely sets things up for the rest of the series and is likely to be a Mini-series at that. 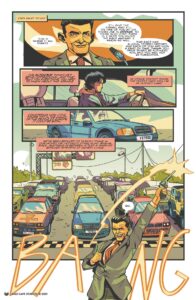 And with the cliffhanger Ryan leaves us with, I’m curious to see just what kind of situation Sebastian may find himself in once he wakes up. I enjoyed seeing Emanuele Parascandolo’s art and Michele Monte’s colors help provide that Post Apocalyptic look quite nicely if I say so myself. Now I am curious if its only Europe that’s stuck in a Post Apocalyptic situation or if the rest of the world is like that. Is the Autocrat controlling absolutely everything and that’s why a friend of Sebastian’s thinks prices are horrible elsewhere because of his misinformation scam? Will the Autocrat be brought down by the end of the series? And if so, will Sebastian be a part of it? Will Joamette Gil keep rocking the letters? 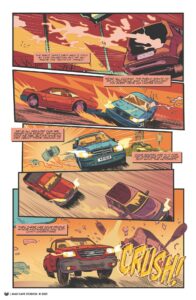 These are questions I hope we get answers too and even if we don’t on one or two of them, I can live with that and maybe somehow trick Ryan into providing answers at some point. Just kidding. Maybe. So if you’re ready to rev your engine for a wild and unsafe race, be sure to grab up Speed Republic in February!

Summary: In the future, Europe has united under one man, The Autocrat. He rules the apocalyptic landscape from corporate monopolies with a vision of unity that is gospel to some, but hollow to others. To distract the 99% from their poor and empty lives, they are given the opportunity to compete in the Grand Race. A marathon street race through Europe where only one driver can make it to the end and win a life of luxury.

Our hero, Sebastian Valencia, enters with the hope that winning this race can make up for his wasted past, but along the way he starts to question what kind of future he is actually buying into.