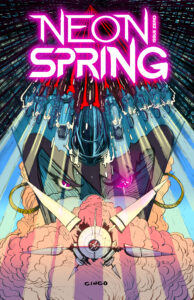 Born from a joke, Neon Spring is Ian Cinco’s take on the world in the future involving a mixture of Sci-Fi and Cyberpunk conventions but this world is no laughing matter my friends. Far from it as despite the absurdity of a sex bot and a car with an AI with a penchant for lobotomizing certain people named ‘Mother’, the idea works. It works so well in fact that the Kickstarter for #0 went past its intended goal of 2,000 dollars to 12,036 dollars! It probably helps that the first (and only one in this issue at least) target we see in this book resembles a certain so called leader we all had to deal with for four years so it probably felt very cathartic to see this guy get his just desserts. Even if we have no real idea of why the Skull Squad went after him other than being a Douchebag. But that’s reason enough I suppose since no one really likes Douchebags as it is. In the future, I hope we get to see how and why the Skull Squad formed and how they came across Mother. Who, if she wasn’t confined to her current form as a vehicle, would more than likely be an outright nightmare on the entire city.

And probably not even the Skull Squad themselves would be safe but I could be wrong! I’m assuming the purpose of inputting a device to control the body after the brain removal is to get an in for certain places if the target has any kind of connections that the Skull Squad would want to make use of for whatever reason. Now whether or not Mother is taking advantage of that for her own purposes is unclear but I could easily see that happening if Ian chooses to go that route. The same could easily be said for the sex bot as well that Araina, aka Baby Skull, the Master Skull’s daughter, seems to have a thing for. Which could all too easily lead to a disaster. Ian himself handles all duties for this book and I’m assuming will be doing so with the rest of the series and he handles it all pretty great in my view. Neon Spring is definitely NOT for kids, the easily offended, or those with a weak stomach. But if you love takes on the future that aren’t super bleak, this will be something for you! 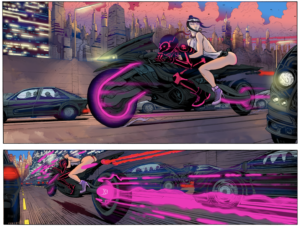 Editor’s Note: For those interested in getting a copy for themselves, especially if you didn’t have a chance to get a pledge on the Kickstarter, pre-ordering is available!

Summary: In a distant future, a group of mercenaries, named Skull Squad, and a car fitted with a superintelligent A.I., named Mother, stalk the city taking brains. Mother lobotomizes people, extracts their brain and refits them with a device to control their body.  Skull Squad’s job is to ensure the targets get in the car while simultaneously making sure Mother does not get out.

After a brain-picking mission goes astray, Skull Squad finds Zuzu, an apparent sexbot, to help lure their target into the car. Their attempt to salvage the mission is a success, but Zuzu is not what she seems and with her comes the specter of the Neon Spring.