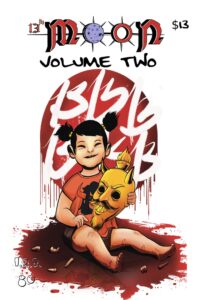 So I’ve been sitting on quite a few comics lately that’ve been needing to be read and or reviewed. And tonight, I finally got around to that thanks to deciding to set aside some time for them. Nicely enough, these books are all also currently on Kickstarter and all of them are pretty great, even if there is a nitpick or two I may have here and there. First up is 123 GO!’s second volume for the 13th Moon, something I’m sure you all may remember me covering the first volume awhile back and enjoying it. Though the version of volume 2 that I have right now is more of a promo version than the full on version but that’s okay as what’s in this book is pretty enjoyable nonetheless. Featuring the talents of Phoebe A. Xavier, Renan Balmonte, Dan Schmidt, Ben Pyle, Jasen Smith, Leanne Kathleen Ingino, Jorge Gabatto, Juan Manuel Almiron, Chris McAuley, Jeffrey Haas, Eddy Heddington, Dianne Yingst, and Joseph Cervelin. And ya know with Jeffrey involved, there’s gonna be some dark Angelic shenanigans involved! Dark and somewhat tragic and I am looking forward to seeing what happens in the future with a certain half Angelic child. Mr. B. Nimble is the first story for this promo version of the second volume of the 13th Moon and I rather liked it.

Even if some of the graffiti seen in the pages was kinda hard to understand and when you think this is a fairly light hearted story, it proves to be anything but by the end. Which makes sense considering the 123 GO crew don’t really go in for happy bunnies and what not. That, and having the Kickstarter around October and that being the month of spookyness and all that good fun horrorness. Yes, I know that’s not exactly a word but we’re gonna roll with it regardless! Though I’m curious if Knimble’s behind some gory actions we see towards the end or if someone else is behind that. Something that may be left as a mystery unless Phoebe chooses to touch on it again in the future. This one and the one involving a hunter and Werewolves are perhaps my main two favorites of the second volume. Especially considering the Werewolves one since I do love Werewolves and all and what happens with the hunter is just poetic justice. 13th Moon: Volume 2 is currently at 44 dollars of its 4,000 dollar goal with 31 days to go, so let’s get on it folks! 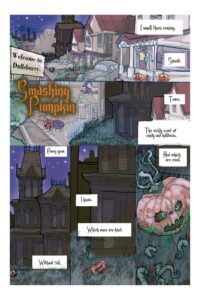 This Halloween, the pumpkin carves back!

Up next in what I read and is currently on Kickstarter with its second issue known as Journey To The Middle Kingdom by Jonathan Hop, Dimas Yuli, and Novella Locritani. JTMK features modern day characters who are tasked with setting things right in ancient Chinese folklore thanks to a mysterious force turning things upside down. Now the art is kinda cartoony/anime like at times but that definitely doesn’t detract from the story and the fact that Jason, Michelle, and Sabrina get to use magic paint brushes to deal with various issues is a neat addition once the story gets really going. Which honestly reminds me of Power Rangers: Samurai a bit as they did that sort of thing as well with their Morphers and their paint brushes. Now I honestly didn’t know about the Legend of the White Snake and I liked the interpretation of it that Jonathan does here and I’m looking forward to when the kids will be getting more involved in that situation as time goes on. 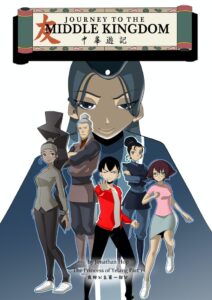 Especially now that they are dealing with the issues going on in the Yelang Kingdom thanks to an evil and jealous Queen that got the Princess banished. A paint brush being left behind during an escape is bound to have some bad consequences and will be interesting to see how that plays out. Now, while I do like what I’ve read so far, two gripes I do have is that I find it kind of unbelievable that no one took issue with the fact that Michelle had apparently not been seen in three days. Sure, its mentioned that she gets focused a lot on projects but still, I would think there would be a little bit of worry there. My other gripe is the fact that certain words will basically get broken in two in various speech bubbles as it feels unnecessary. That, and it kinda takes me away from the story a bit as its distracting. Now this could have been Jonathan and the creative team’s way of saving some space for all I know. But regardless of that, I am looking forward to seeing what happens next.

Issue 2 is currently on Kickstarter and is at 803 dollars of its 2,000 dollar goal with 17 days to go. So if you love stories that explore other cultures and their legends, this will be for you! 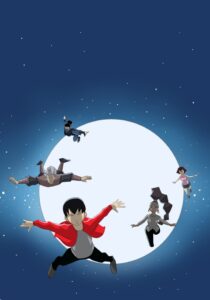 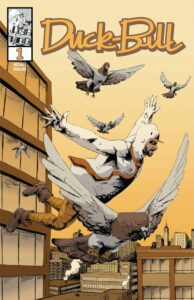 Now as for the B & W super hero title called Duck-Bill by Michael Pickard and as summed up by him as ‘Adam West’s Batman stumbled on to the set of a David Fincher movie’. Granted, I’ve never (to my knowledge at least) watched a David Fincher film and while the costume Duck-Bill has is on the ridiculous side and would make you think this fits more as a parody and or comedy hero book, that’s definitely not the case. Heck, the first panels alone in this first issue are proof enough of that, even if you may not realize what’s going on at first and need to take another look or two. Duck-Bill himself as we soon learn, is alluded to having some problems. Problems that basically made him the black sheep of the Superhero community and with the general populace. 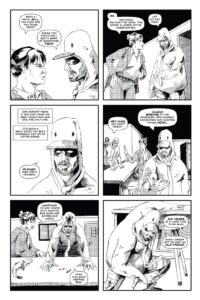 Whether or not this latest grizzly case will help him overcome these problems remains to be seen but at least for now, his long time friend and cop by the name of Grace is willing enough to let him work with her on this case. Even if there are others who feel she shouldn’t be working it with him and to just keep him away. Hopefully by the time all is said and done she won’t be regretting the decision to let him work with her. Duck-Bill is currently at 726 dollars of its 1,000 dollar goal with 23 days to go and if you like B & W super hero titles with an air of older ages, this will be something you’ll want to check out. 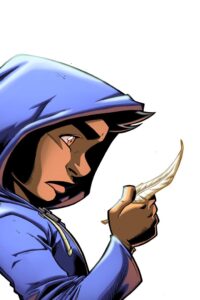 And last but not least in these titles that kick-started my heart (thank you Steven) is the first three issues known as Deliverance. Which all three are currently on Kickstarter as I type this. Deliverance is by T. Garrett Petersen, Diego Toro, Kote Carvajal, and Cristian Docolomansky and centers on Biblical themes. Which… Yay, a favorite of mine as you guys know by now at this point! Petersen plays with the idea of God not being around for whatever reason and how that tends to affect the Heavenly plane and even the Earthly one somewhat.

But he also takes things a bit further to where someone needs to take the reins or things are gonna go pretty bad if no one is in charge. Though why an Angel simply can’t just be selected to do it seems a little odd. And I like that Petersen even touches on the possibility of God being a man or a woman through some of the dialogue we later see in these issues. So instead of it only being Angels with the chance, its a certain bunch of Humans who also get to be the ones to potentially be the next God thanks to having a lovely spark of Divinity in them. Something that no doubt makes a lot of the Angelic types fairly unhappy. Only, unfortunately, in order to get to become the next God, they are gonna have to battle it out to the death until just one Human or Angel is left. Something that’s a little on the screwed up side of things and I wonder if this really was God’s plan or just something the Angels are saying to get this bunch of Humans to go along with it all. Especially since Angels don’t necessarily like Humans all that much due to past issues in Heaven. 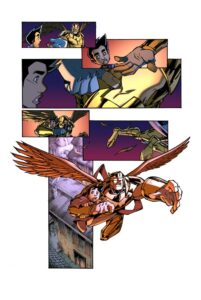 Now the Angels not liking Humans is a trope that’s been seen before but Petersen does it in a different way that I haven’t (to my knowledge at least) seen done before. Namely, Humans causing problems with the Angels in Heaven. Where those Humans went after God said enough is still a mystery but I do hope Petersen touches on that in the future. And one of the Humans we see here, is a young mother and I’m not entirely sure if its her or her baby who is gonna have to be involved in the tournament. Though, given how the mother tends to deal with things, I wouldn’t necessarily want her to be the one to ultimately win the tournament. There’s also a teacher we see in the first issue that I honestly just can’t stand as she’s basically an asshole and thankfully not involved in the tournament. It’d be scary to see her win given how she is! Now if young Franklin North ends up winning the tournament, I’d love to see her reaction to that cause it’d be a lot of Crow for her to eat. 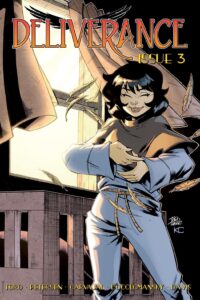 Now there is a couple of misspelled words and that weird breaking of words like in JTMK but that’s not as prevalent here. And neither of these issues don’t really take one away from the story, at least, it didn’t for me in this instance. Readers may even take issue with certain events in this story and I don’t just mean those who have the Faith since Petersen doesn’t exactly hold back. Which kinda makes me think we’ve just barely seen that in action since he’s just getting started with these first three issues. And with what we see at the end, there’s definitely a bit more going on than anyone knows. Deliverance is currently at 1,182 dollars of its 1,000 dollar goal with 17 days to go.