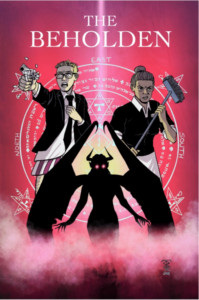 Typically, whenever Bob Salley has sent me something to check out, I tend to enjoy it and his most latest release is just another example of that. Albeit, I went into this not really having a clue what the story was about and came out of it wanting more while also shaking my head at the same time in mild exasperation. Mostly on account of the fact that one Agent Devin McLean’s desires are likely not only going to get him killed but a whole bunch of others after making use of the lore of King Solomon. Which… Is a lot more than just lore in this latest offering from Bob! Its also not (unless I’m just not paying enough attention) often that you see any form of Media make use of the King Solomon material and seeing it used here is pretty great. I’ll also point out that to my knowledge, The Beholden is the first time I’ve experienced The Becka’s craft and I am looking forward to seeing more. Whether that’s with The Beholden or elsewhere.

Now, like I mentioned earlier, McLean wants to be taken seriously, he wants the respect of not just his peers, but from his family too. There’s a lot of ways he could do that but it would take time, though honestly, those ways are probably better than using something Supernatural as that could easily go very wrong. And if McLean survives to the end, he’ll probably be way more willing to listen to what Lupe says. Lupe, a somewhat over bearing and protective mother doubling as a janitor at the place McLean works for. Which also seems to double as a Museum as well. Her encouraging attitude towards McLean makes me wonder how Rosy (Lupe’s daughter) would feel over the whole thing and if whether or not that would cause issues. Something I’m curious about if whether or not Bob will touch on that in between other situations.

Namely, the one that begins to develop towards the end after a Summoning Ritual gets unintentionally interrupted! And in a way, this has the feel of a buddy cop styled adventure but without the cops part and I can’t wait to see where things go next after Naamah’s arrival!

The Beholden #1
Self-Published
Created by: Bob Salley
Written by: Bob Salley and The Becka
Illustrated and Colored by: The Becka
Letters by: Cardinal Rae
Edited by: Drina Jo
Reviewer: Rob Wrecks

Summary: Am ambitious, nerdy Agent and the Museum Cleaning Lady team up to fight a Succubus and the 72 Demons of the Seal of Solomon.