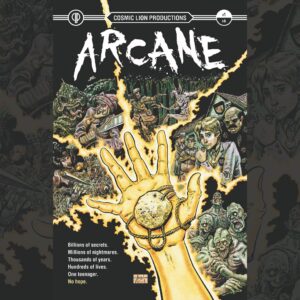 For a number of folks, they’re looking for something that’s not so ordinary for whatever reason. And for some, they find it and tend to like it. At least, after a bit of drama and what not. Now for Hogan, he’s a bit on the opposite side of that as he’s just wanting normal for himself after having his life uprooted following his dad losing his job. His mother’s no where to be seen and that kinda gives me the impression she just to high tail it rather than stick around and be supportive. Of course, I could be wrong but given how Hogan’s dad is kind of a jerky hothead, I may not be entirely wrong. But that remains to be seen if and when Steele Tyler Filipeck chooses to touch on that later in the story. I also have to say I like the limited coloring Chris Anderson and Christian Meesey use for Arcane. It gives Mac Radwanski’s art a tense like quality with a touch of uncertainty as you’re never quite sure what Steele and the team have in store next for you.

Especially as Hogan has to deal with the fact he’s inexplicably found himself in a situation bigger than anything he’s ever imagined! And that’s after he gets his memories back thanks to a kind of sort of new friend he makes. One who isn’t necessarily too enthused about the entire situation given whatever he had in mind for something known as the Oculus that is now unfortunately in Hogan’s lane more than his now. By the end of this, I’m curious if the new ‘friend’ will make another appearance in the next issue and so forth given how things went towards the end since this is a Supernatural Horror title. And Hogan could easily be on his own for the rest of the series and if he survives, normalcy no doubt will be something he’ll want even more. Thank you to Ben Granoff for giving me the opportunity to check this out and I look forward to more when the time comes!

Editor’s Note: Interested in checking out Arcane #1 for yourself? Then head here!

Summary: Hogan is the new kid in town and he already knows that you don’t get involved in other peoples’ problems, but when he does it lands him neck-deep in all the occult mystery, monsters and madness that you can handle!