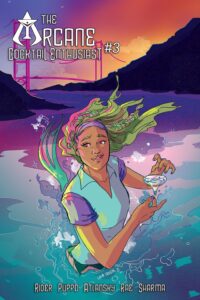 When Jeff Rider sent me the first three issues of The Arcane Cocktail Enthusiast, I wasn’t entirely sure of what to expect. But by the time I finished issue 3, I had come to really enjoy the world he’s come up with for TACE and also fervently wishing on a horrible demise for Mace Dantzari’s greedy, horrible ass self. But more on that in just a bit, folks! I like the idea of using Magical/Mythical ingredients to create drinks and serve them in a bar and doing so WITHOUT killing off said Magical/Mythicals. I don’t know if its been done before but as this is my first experience with the idea, I’m digging it a lot. I love that New Guy Bill is basically us, the reader, experiencing everything for the first time, albeit, thankfully without getting infected with Wrath and experiencing a few near death experiences. And especially on the first day of work! Makes one grateful their first day job experiences weren’t nearly as eventful! Now, New Guy Bill isn’t the protagonist of this story. No sir, that most excellent drink creating honor belongs to Lark Leraar.

Who nicely enough, is following in her long missing dad’s footsteps even if she’s not necessarily realizing that until later. And if it wasn’t for problematic issues like Mace Dantzari, the only real dangers she’d likely have to deal with is when it came time to collect ingredients for drinks to serve at her bar! Mace even actually reminded me of how things got in the Ogre(s) world by Bob Salley and he’d have more than likely been right at home there given his greedy desire to hunt down various elements of the Magical/Mythical world for his own ends. Regardless of whether or not it brought about extinction for a race like the Mermaids on Earth. I’m also pretty curious about Lark’s relationship to Naomi, who works at Lark’s bar and is on what Lark does. Are they just really good friends or is there an even deeper connection between these two ladies? Either way, I dig the friendship between the two! 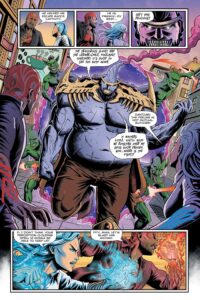 As each issue, things slowly progressed and I even thought at one point that New Guy Bill was a bad guy. Which would have perhaps been a cliché but I’m glad that route wasn’t the case with Bill. Who most likely is forever gonna hate the words ‘new guy’ for the rest of his life! I’m also liking how Music is also used as a form of magic and that makes me think of Arye Dworken’s Songr. Issue 3 is perhaps also where things started to hit pretty hard (so far) as secrets were revealed and the stakes got higher. I’m excited to see more of Davide Puppo, Lesley Atlansky, Cardinal Rae, and Noah Sharma’s work in the future once Jeff brings us the next exciting 4th issue! So if you’re looking for something a bit magical and with a female lead, TACE is for you! Which is also about to launch a Kickstarter on September 14th for its third issue! So stay tuned for that!

Editor’s Note: You can also visit the Cloud Wrangler website to grab yourself a copy of the first two issues and some other TACE goodies!

Summary: As Mace Dantzari begins to step up his attacks, Lark uncovers secrets of her past.