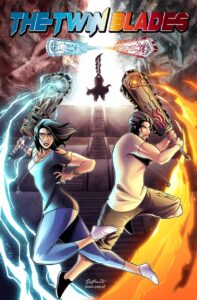 When I learned of Jarred Lujan’s The Twin Blades project and what it was about nearly a year ago and did my interview with him, my interest was piqued. I mean, Aztec Mythology blended with Modern Day life also mixed with a bit of Sci-Fi and Action? How could I pass up on that!? That, and thanks to the Teen Wolf MTV series having touched on Tezcatlipoca, seeing that God be used here was something I wanted to see and I was not disappointed. Of course, overall, I wasn’t disappointed at all with this offering from Jarred Lujan and Julio Suarez. Hell, I was practically on the edge of my seat (though mostly for lighting purposes) and not really wanting to put this down as I read through this! Plus, in addition to what Teen Wolf did, there’s also some of the Aztec Lore that was used for the three season series From Dusk Til Dawn that I enjoyed seeing here such as the Jaguar Warrior. Who like the Dusk Til Dawn versions, is no pushover! Reading Twin Blades was honestly refreshing to me as it was great to see something not so heavily American influenced and I am all for more of the Twin Blades universe should Jarred and Julio chose to do more.

Which… I really, REALLY hope they do. Xiomara and Basilio Gutierrez, twins and the current bearers of the Macahuitl blades, blades created from the eyes of the God Xolotl himself, are just about as different as night and day. Where as Xiomara herself is all about upholding the responsibility they’ve inherited, Basilio isn’t quite as willing which somewhat puts the two at odds for one reason or another. Even when evidence begins to mount that everything he’s learned is actually real and kinda keeping him from going about life like he wants! Kind of a downer yo but hey that’s life at times for ya! I loved how gung ho Xiomara was once she crossed paths with the Jaguar Warrior known as Yaotl and I swear I could hear incredulity from him in the beginning of their meeting. And to be honest, I’d love to know more about Yaotl and his past given that he’s something of a traitor who absolutely does NOT want to return to Mictlan, the land of the dead, for that matter either. 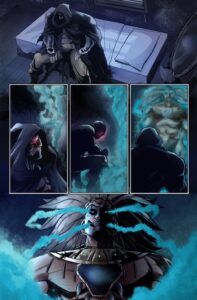 Julio does a phenomenal job in bringing the fight scenes to life with Rocco Langg’s colors adding wonderfully to that as well. I could gush on and on about this book but I won’t as its better for folks who haven’t read this yet to experience everything this excellent book has to offer. Plus, there’s so much potential to explore here with not only Xiomara and Basilio, but past bearers of the Macahuitl blades and perhaps that of future bearers as well. And I can imagine that while ol’ Tezcatlipoca wasn’t too pleased with how things went by the end of this one-shot, he’s not giving up by any means where his goals are concerned! So if you’re looking for something different featuring some lore you may not be familiar with and done by a team of Latine creators, I’d highly suggest checking out The Twin Blades! Which will be available in Jarred’s upcoming Kickstarter for All The Devils Are Here on September 16th!

When the gods came together to create the Fifth Sun, the Soul Guide of the Dead, Xolotl, refused to perform his own sacrificial rite. Jaded after millenia of destruction and death, Xolotl hid away and watched his family sacrifice themselves in the name of hope for life beyond themselves.

Xolotl, alone and ashamed, became racked with guilt, causing him to weep so intensely that his eyes fell from his head and descended to the center of the newly forged universe: the Aztec capital of Tenochtitlan.

Seeing an opportunity to redeem himself, to honor the sacrifice of his family, Xolotl guided the Aztecs to forge two macahuitl, imbued with a piece of his own godhood. The Left and Right Eye of Xolotl, entrusted to twin siblings to wield together in defense of the Fifth Sun, became known as…The Twin Blades.

Now in the year 2108, the blades are entrusted to twins Xiomara and Basilio Gutierrez who inherited them as children. Xiomara is strong willed, determined, and believes in herself. She’s committed to her role as wielder and her sworn purpose of defending the Fifth Sun…but Basilio? Well, there isn’t exactly a bunch of threats to the Sun running around and he’s ready to move on with his life. Leaving his role as Wielder behind to pursue his goal of becoming a teacher, Basilio strains his relationship with his sister.

Unfortunately, things are rarely so simple. The Lord of the North himself TEZCATLIPOCA sees a distracted pantheon and a set of divided Wielders as an opportunity to mobilize his pawn YAOTL: a resurrected traitorous Jaguar Warrior now obsessed with never returning to Mictlān, the land of the dead. Yaotl is bestowed with a blade forged from the primordial Black itself and sets out to destroy the Fifth Sun and create a new universe for Lord Tezcatlipoca.

Can Xiomara and Basilio stop arguing long enough to stop Tezcatlipoca’s champion? Even if they can…will it be enough?