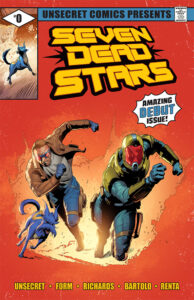 In the prelude to the ongoing Seven Dead Stars saga, offbeat heroes Unsecret and Form crash land on a mysterious planet where things aren’t always as they seem. Although the natives appear friendly, there are clues that suggest something more sinister might be at play. As the tension builds, their only true friend is a curious blue dog harboring secrets of his own. What they discover along the way will not only alter the course of their lives, but the future of the entire universe.

For fans of Star Wars and Guardians of the Galaxy, Seven Dead Stars is available on Comixology September 8th.