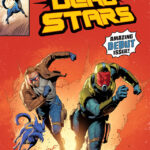 When your best character is a small alien dog you never know exactly if that’s a good or bad thing for your comic. Let me say right up front, it’s not that the #0 issue of “Seven Dead Stars” is bad at all. In fact, I would dare to say it’s entertaining. I had a […]