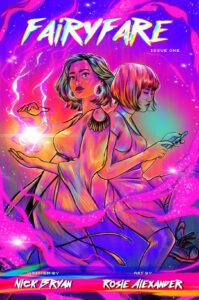 After centuries spent trudging from door to door granting wishes, one of the fairyfolk looked at the modern world of smartphones and gig economies and realised – there should be an app for this.

Log onto FairyFare now, and have your problems solved, tasks completed and crises averted, all in one snap of a magic finger. (Terms and conditions apply – no sex, power, love or money.) Not only will FairyFare solve your problems, their cut of the fee goes to charitable research!

Or why not join the team as a pixie, attending call-outs and improving lives one job at a time, with the help of a menagerie of magical creatures? London-based sisters Philippa and Natasha Spaight both signed up, and… Phil seems really happy with it!

Admittedly, Tash quit and is now out looking for a new job, as she couldn’t stop wondering – is cash-for-miracles really the way to a better world? And why do these fairies want human money anyway? 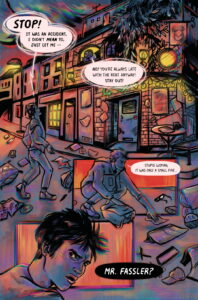 As always from Bryan & Alexander, the result is a heavy combination of high concept, comedy and kaleidoscopic, unique art. Pipedream Comics described FairyFare #1 as “a brilliantly strange and unconventional read… A smartly written story with some truly outstanding visuals, this is another 5 star ride from Bryan and Alexander!”

The team first worked together on 2018’s The Little Deaths of Watson Tower, a black and white one-shot about kids becoming grim reapers and confronting the scampering nuisance of death itself. Little Deaths ranked in Pipedream Comics’ Top 50 of 2018 and was described as “sweet and dark and beautiful and powerful” by Matt Ligeti of The Comic Book Yeti. 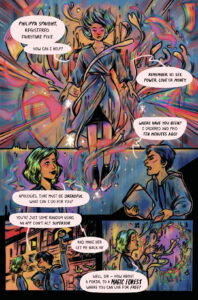 As well as physical and digital copies of the new comic, the Kickstarter campaign includes other rewards, such as guest prints by artists Robert Ahmad (with colourist Gabby Metzler), Lane Lloyd and Sonya Kinsey, plus stickers, commissions from Rosie and more. It began on August 5th with a funding target of £1500.

You can find the campaign page here: https://www.kickstarter.com/projects/nickbryan/fairyfare-1

Creator biographies:
Nick Bryan is a writer of comics and prose from London, inspired by a combination of mounting fear, an eclectic range of comics, TV & literary novels, and his vague recollections of a philosophy degree. He enjoys overthinking, pub quizzes and a nice white beer. Best known for the And It Snowed Kickstarter, Little Deaths of Watson Tower, The Catalyst one-shot from Comichaus, and the Hobson & Choi novels. See more of his comics work here.

Made in the 80’s, born in the 90’s, Rosie Alexander can be newly found in London, feverishly Illustrating and talking nonsense on her podcast, Drunk Art Review. Growing up a traditional artist with a deep love of art history, cinema, and storytelling; Rosie quickly went on to have an insatiable appetite for modern technologies, graphic novels and the world. Her work is openly erotic, incandescent and, more often than not, entices you in to flirt with the taboo. In 2018 her first published comic ‘The Little Deaths of Watson Tower‘, written by Nick Bryan, hit stores. Followed by ‘Saffron: Spacetime Academy Adventures‘, written by Samuel George London, in 2019, published through Fair Spark Books, and her artbook Eros + Venus which funded on Kickstarter in early 2021. See more on her website.