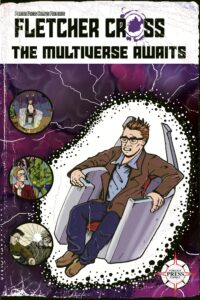 Its always fun when you see comics explore the concept of the Multiverse and its just as fun to see in general TV and Movies, though I’ve never been a huge fan of the Star Trek version as evil doppelgangers? Ehh. Luckily there’s not really an evil doppelganger to be found here in the Fletcher Cross Anthology from Foreign Press Comics. Which, features IndieComiX’s very own Derrick Crow for that matter! Its kinda goofy that Fletcher’s means of multiversal travel is a recliner chair (called a Dimensionalizer here) but considering this is 1950s-60s inspired, it only makes sense that it would be a thing! And I would say that there’s a lesson to be learned from this Anthology by the end of it. And that would be to keep a hold on your impatient eagerness as a feat like multiversal travel could have all manner of things go wrong with it. Which, in one sense, certain things do kinda go wrong due to some unintended consequences of Fletcher’s arrival and interference in a situation or two. Something I’m curious to see if any of that will have some bad consequences later down the line should the Cross Creative team want to explore those.

And I personally hope they do as it would be damned interesting to see how those troubles manifest themselves in Fletcher’s home world. There’s also a homage or two some folks may be familiar with as they read through this, though I myself only really recognized one of those but that’s okay. I’m also loving how in ‘Priorities’ by Nick Bryan, Boris Pecikozic, and Kevin D. Lintz, its basically a nod towards Social Media algorithms in what does and doesn’t get shown. Even if in this story, its a little more on the serious business side of things due to the threat going on for the people in this reality. Which, this is one of those things I mentioned earlier about whether or not this will be a consequence that’ll show up in his home reality if the creative team comes back around for another go. Granted, with the final story, I am really hoping they do come back around as it seems all isn’t as it appears to be. Making my view of Fletcher only returning home because he got tired of the danger/various troubles and not having a lot of fun like he thought he would and not truly learning anything possibly a little off the mark there. 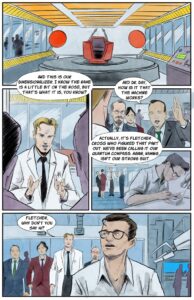 This was enjoyable to read for me and it was great to see so much talent in this Anthology and I for one am looking forward to seeing more of their work in the future. Especially Derrick’s even if I am a bit biased but oh well! There’s also a Kickstarter currently going on for Fletcher Cross so be sure to get in on that!

Summary: A collection of 1960’s-inspired sci-fi hero Fletcher Cross as he travels the multiverse with his amazing Dimensionalizer machine.