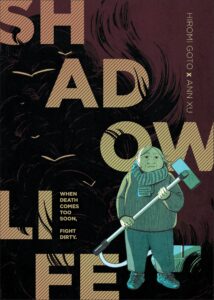 At 373 pages, Shadow Life is the story of Kumiko, an Asian-Canadian towards the end of her life and trying to live it without interference from her three daughters and basically giving Death’s Shadow the finger at the same time. And that? Along with the POC Representation Hiromi Goto and Ann Xu bring are all things I’m here for. As who wants to keep seeing the same old cliches about old people in the media? Now I will say that the story starts off slow but eventually gets to a moderate pace as we read along and see Kumiko living her day to day life and some of the issues she has thanks to her advanced age. Which, this, along with the surprising but tastefully done nudity may bother some but the lack of coloring and a dash of maturity kinda helps to not be as bothered. I love that we got to see Kumiko getting the Hell out of dodge from the assisted living facility her well intentioned daughters placed her into.

Though well intentioned or not and the fact she was willing to try it, I think the girls would have been better off not putting her into something she ultimately didn’t want. And I wonder how much planning went into the whole thing so as not to get caught by any of the employees there. The fact she later manages to successfully get a new place and not be found shows she’s damned capable and I am all for that! The easy going rapport she has with young Yusef is great to see and that she lets him help shows she’s not entirely unwilling to accept help from others while at the same time, completely unaware she’s being followed by a shadowy creature. One capable of taking any shape it wants for that matter and why its following her around becomes clear much later on in the story. Though part of me just wanted to slap ‘em considering its poor motivations where Kumiko and other factors are involved. 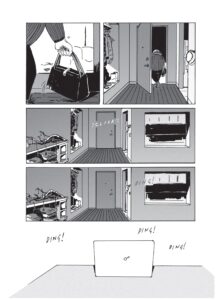 And of her three daughters, Mitsuko is the one we see/hear from the most and I can’t say I’m much of a fan of her. Being rather over dramatic, not trusting her mother to be on her own, and being more worried about how those at the facility Kumiko left are going to handle things in the aftermath. Yes, I get that she’s worried but she does need to tone it down a notch instead of being so dramatic and trust her mother’s own capabilities. Water’s an interesting theme that is present a lot through out this GN and Kumiko has something of a tragic relationship with it due to what happened with her husband at some point before the story and its interesting to see it in various places. Especially in places it shouldn’t be and kind of makes you think that maybe she’s had an accident without realizing it. Something we later learn isn’t exactly the case given a certain shadowy’s presence attempting to commit Murder 1. The use of her recently acquired vacuum cleaner on that fella makes for a unique if funny moment and I love that she’s not quite freaking out over the whole experience.

The use of a Vacuum Cleaner on Death’s Shadow is, as I said, unique and not quite something (to my knowledge at least) I’ve seen before and I just love it. Kudos to Hiromi and Ann for making something like that work and it not come off as a hokey kinda thing. And I love that despite one having lived for so long, they can still have secrets that not even their children know about and its just really well done here in my view. In this case, Kumiko being bi-sexual is one of those things from her past that her kids didn’t have a clue about. At least until a certain Shadow started making itself a nuisance anyway! Said nuisance getting its ass handed to it later on in such a great way with some help from those in Kumiko’s life. I could go on and on but I’d ultimately spoil things and that’s the last thing I really want to do. And as much as I do love this book and the work Hiromi and Ann put in, I do feel like it would have benefitted from having a Colorist involved as Ann’s art in some areas feels like it would have benefitted from that arrangement. For B and W works in some cases and in some cases it doesn’t but for the most part, it does work here. 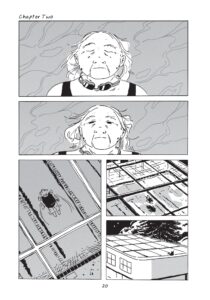 I’m definitely down to check out more of Hiromi and Ann’s respective works whenever I get a chance as for me, this was a great first introduction to their work. Shadow Life as of this past March is now available for sale so get on it, folks! As this fight with Death is one for the History books you don’t want to miss out on!

Summary: When Kumiko’s well-meaning adult daughters place her in an assisted living home, the seventy-six-year-old widow gives it a try, but it’s not where she wants to be. She goes on the lam and finds a cozy bachelor apartment, keeping the location secret even while communicating online with her eldest daughter. Kumiko revels in the small, daily pleasures: decorating as she pleases, eating what she wants, and swimming in the community pool. But something has followed her from her former residence—Death’s shadow.

Kumiko’s sweet life is shattered when Death’s shadow swoops in to collect her. With her quick mind and sense of humor, Kumiko, with the help of friends new and old, is prepared for the fight of her life. But how long can an old woman thwart fate?