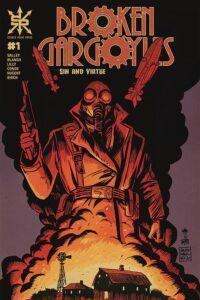 Sin and Virtue continues in the aftermath of the 3rd issue of this saga of broken men, broken families, motivations, and recovery after the first World War. Though I would call this issue 4 but that’s just me personally. I last covered this title (the first issue at that) way back in April 2020 and made the mistake of not keeping up more like I should have but thankfully it didn’t take me too long to get caught up and when I learned of young Kat’s backstory, I couldn’t help but feel for that girl as she didn’t deserve what was done to her. And in her own way, it sadly makes her a perfect fit for this new era of the 117th Infantry Regiment led by Commander Prescott. I love that this story isn’t taking place in a more normal timeline of the era and seeing some of the stuff Bob Salley and friends add in makes for surprise twists. Which, is fitting of course given this is a Dieselpunk tale. Issue 3 saw William cross paths with the Commander and his bunch but things didn’t necessarily work out all that great. Gosh darned interfering Russians!

Leading to William meeting a US Marshall with an interesting partner! And I gotta say, I like her as she’s not one that’s much for nonsense as we see in Sin and Virtue. Sin and Virtue also finally gives us some backstory on Ben, the escaped prisoner, and it quite frankly makes me want to punch some people in the face as his words about how not all convicts are murderers still rings very damn true. Especially given the Hell he was put through just because of Racism rearing its head when it comes to an African American man possibly getting to serve his Country. There’s another (a certain Doctor as well) in this story who needs a solid ass kicking and hopefully he gets his after being such an old world minded thinking asshole to the wife of a member of the 117th. Julia definitely isn’t willing to take things lying down either and with her being possibly added to the mix, I’m curious to see what else Bob has in store for her as this arc gets going. And quite frankly, Dr. Poltron sickens me and I can only assume he’s why the Commander looks the way he does now.

Its no wonder the Commander’s out for revenge and why he wears what he wears thanks to this man’s possible involvement with his current lot in life. That Julia and Vera are so understanding and accepting of the Commander’s appearance and as well as everyone else’s including Kat’s makes me happy. As both ladies easily could have rejected them but didn’t and I don’t believe its just on account of Julia’s husband’s ties with them but also on account of being genuine good people. Of course I could always be wrong here on that. I’m excited to see what happens next, will Julia and Vera join the Commander and his quest? Or will the Commander and friends make the bank re-think their decision about Julia’s home and land? Will William and the Marshall find success of their own? Or will Dan’s circumstances force the Marshall to do something differently? Only Bob Salley and Christina Blanch knows the answers to these questions and I look forward to seeing the answers as the time comes! Broken Gargoyles #1: Sin and Virtue will be available for your reading pleasure this June on the 30th! So with that said, do be sure to get your pre-order on for this!

Summary: Prescott and his men seek out the widow of their fallen brother-in-arms as they find her fighting to keep her farmland, while Manco teams up with an aging US Marshall on her last assignment to capture Ben and the other escaped convicts.