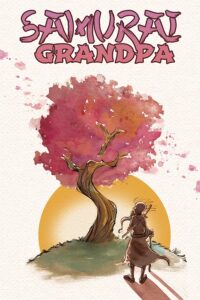 The journey of a thousand miles begins with a single step, or in the case of the elderly, maybe about 10. But in the case of former Samurai Ojichan, he doesn’t really have that problem as even for his age, he’s still quite spry! And for him, his journey starts when an attack on his family occurs while he’s out, leaving one member dead and another taken with but one clue left behind. One that ol’ Ojichan is quite familiar with from his days as a younger man and despite his age, sets off to deal with it for good. The whole thing being proof that even old folks can still go as we see on quite a few occasions that Ojichan still got game! I love that Shawn Daley’s (the same Shawn Daley of Ogre fame) art and colors is present all through out this volume, making it all look like a painted art piece rather than drawn. And I love that at one point, despite its absurdity, Ojichan takes the threat of Ninja Monkeys rather seriously. The concept of course reminding me of certain elements from Kim Possible back in its heyday.

Every encounter Ojichan has in this book until he gets where needs to be, makes this world and his history that much more alive. Making you wonder how certain things came to be, such as one character’s habit of repeating himself with certain phrases. Though I would’ve figured Kitsune (and I love seeing that bit of Japanese Mythology in this book!) would’ve been far less forgiving of the old man considering an action of his in the past. But its apparent proof that they too can possibly change despite the old man’s viewpoint on certain things. Or its just due to their past history and recent events in his life that she’s not quite so willing to go harder on him. Whether or not Eastin DeVerna intended for readers to think on that whole thing remains to be clear but kudos to him either way on that area. Its also kind of surprising to me that Ojichan appears to have a hard time believing certain things a little girl he meets in the story tells him. Especially considering he knows a Kitsune and went to some interesting places with her when younger.

But considering the time period and the fact Ojichan’s old and quite likely set in his ways and beliefs, its perhaps easier to see why in that mindset for why he doesn’t believe her. Astrid’s a great kid though and her brother Birker (a Swamp Thing homage?) are characters I would love to see again in addition to Kitsune and since there was mention of a second volume in the works, hopefully we’ll see them again when the time comes. One thing I’m curious about, did Eastin and Shawn make use of ideas/concepts from other Mythologies for this story? Or merely come up with their own takes for mythology? As Sal-Baomr doesn’t really sound like a Japanese thing and more of an Irish or Scottish one. Either way, it doesn’t take from the story in my view as Eastin’s writing just keeps you drawn in and wanting to keep on reading until the final page. And there’s a 157 of those by the way but not one is wasted! I love that this story is interspersed with moments from the past but said past moments don’t take up a majority of the story as if it were an origin.

Now, yes, Eastin and Shawn easily could have told us the story from the beginning, perhaps even in the middle, but instead, chose to go the route you don’t see a great deal of. That being the ending and its all the better for it in my view. And one particular mystery Eastin and Shawn leaves us with by the end after all is said and done, is where exactly Harumi (Ojichan’s daughter in law) got her most excellent skills that we later see put to use. Hopefully this is something that’s explored in that potential second volume whenever the time comes! Another mystery I’m curious about, is if no one ever came back from the mystery island that’s off the shore of what (maybe?) is the mainland, how’d the ferry rope line get established between the two? And why even keep it up if no one’s ever returned from there? Mysteries, gotta love ‘em! Though this part of the story takes me back to Ojichan’s refusal to believe what Astrid’s telling him despite it being right smack in his face but I do love Harumi’s backing her up much to his dislike! I’m also loving how Eastin showed the backstory involving Ojichan and Orochi, whom is the reason this last journey started to begin with due to past events. We get to see each of their version of events that led to the two fighting and what Ojichan thought was the final outcome.

This kind of thing also isn’t something you see a lot of and it was nice to see being done involving two takes on an event. Though how much of what Orochi told Kimiko was the truth and how much of it was just him twisting things to get her on his side? Especially given how Ojichan shows up towards the end of that event and only has what he’s been told by a dying man and the horrors around him to go on. I suppose we’ll never know but its a great bit of storytelling all around. The fight that’s been building up to this point is worth the wait in my view, as we really get to see Harumi and Ojichan in action and the fact that its not going to be all that easy to bring down Orochi. Which… As the saying goes, nothing worthwhile is ever easy! Revenge for revenge is not a path you want to go on but its one Orochi has been on for years since his encounter with Ojichan and his words about the whole thing being a fight Ojichan doesn’t want is true in a whole lot of ways. And not just necessarily for Ojichan but Orochi himself as well.

Samurai Grandpa is a fantastic story that I absolutely love and wish I had read long before now but at least I’ve finally done so and that’s the important thing. As I greatly enjoyed the characters and the world they are in and I would love to see this story adapted for either live action or animation. Revenge can ultimately be your undoing and I love that the old man even tries to reason with Orochi for a better outcome to no avail. Showing that he may be old and perhaps a bit stuck in his ways, he’s at least willing to try and give other things a shot. The ending itself is beautiful and Eastin and Shawn do great work with the symbolism of re-birth and making use of a concept mentioned of early on in the story. That they even provide a short back up story in the aftermath showing the day Ojichan left Kitsune is great but tragic at the same time.

If you haven’t read this for whatever reason, I would seriously suggest doing so as this is a fantastic read from start to finish that you’ll hardly want to stop reading. And with that in mind, head right here to grab yourself a copy of this fantastic read!

Summary: A Samurai past his prime, Ojichan has left the blade behind to live out his remaining days in peace with his family. But when a mysterious figure from his past resurfaces and his granddaughter goes missing, he is forced to set out on one last adventure. As he does, he must explore the depths of his own past, face monsters new and old, and question the choices that led to this final mission.

From Shawn Daley (Ogre) and Eastin DeVerna (Howl) comes an adventure of self-discovery and exploration in a world of magic and mystery!