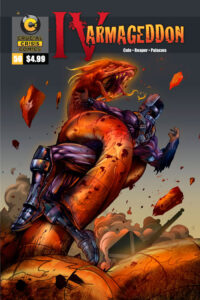 I first heard of IV Armageddon some years ago when I was sent issue 51, aka the pitch issue and really enjoyed it if I recall rightly. Now, fast forward some years later and I have the chance at last to read more of the story, which makes me happy as I’d been wanting exactly that. Now, you might be wondering, issues 50 through 45!? But what about the much earlier issues!? And well, that’s one of the things about this book is that instead of starting at issue 1, the team chose to begin at issue 50 and go down the number order with each new issue. Which is pretty unique as its not something you see much of in comics. Now IV Armageddon makes use of Biblical themes so if that isn’t your jam, turn back now. This story also features a number of factions and its really hard to tell who you should be rooting for since everyone present can’t really be described as ‘good’ given certain motivations and all that. You’ve got Cartegena (Lucifer and Tiamat’s baby boy) and his ilk who want to keep the Rebellion going but there’s some argument about who should lead now in his father’s place.

Which isn’t exactly helping matters any despite the fact there’s a Cease Fire in effect thanks in part to the Trinity. Then there’s Gabriel, who wants nothing more than to crush Cartegena and his bunch regardless of the fact that there’s a Cease Fire before they can fully regroup and begin war again. Ol’ Gabriel’s clearly one of those types who feels they have to do things a certain way despite being told not too and worries of the consequences later. He’s also clearly not a fan of Michael’s considering he’s the one been chosen to lead. The fact he’s called Mike in this story is a little weird considering he’s an Angel and it doesn’t appear Modern Civilization is much of a thing in this story just yet. But given the story summary, its possible that’s already happened but I’m not entirely clear on. Which might be how and why War of the 4 Horsemen later on knows how to produce a handgun. A couple of other examples I thought was a little weird includes Naamah of Cartegena’s bunch being called ‘Naughty’ and Ambriel/Gamorrah of Cartegena’s bunch wearing the Angelic equivalent of eyeglasses. You wouldn’t necessarily think either of these would be a thing and perhaps that’s just me at the end of the day. 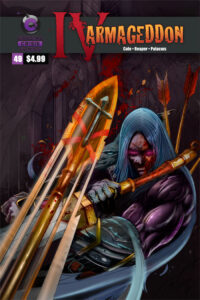 There’s also of course Abaddon, whom some of Cartegena’s bunch would ask to lead them if Cartegena himself won’t. Only, he can’t necessarily do so because he’s protected by the Trinity and if I’m reading right, evidently stuck on house arrest in his castle because of that and quite possibly for his own safety as well. And for those of you reading this and have read the issues yourselves, y’all know how well exactly that works out! We’ve also got the 4 Horsemen faction, all of whom, Death especially, seem to have an axe to grind and are willing to mess things up in order to reach their goals where getting ahold of their brother is concerned. Who may be God Himself? One definitely has to re-read these issues a couple times in order to fully comprehend everything and not be halfway lost due to everything going on. Especially since there’s a lot of fast paced action in these issues that happens quite a bit and oddly placed dialogue that makes it hard to tell at times on who exactly is talking. I also think that color would have done the pages of these issues a huge service as it feels at times like I’ve been reading something that isn’t quite fully finished as on occasion, the art will look kinda awkward but again, that’s just me. And I have been told that in the second story arc, things will be a little slower than in this first part. 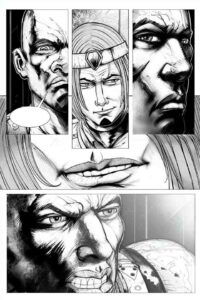 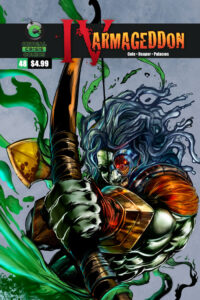 Which I think will do this story a huge favor. Of IV Armageddon’s take on the Biblical 4 Horsemen, I have to feel sympathy for Famine as that guy is not only horribly disfigured by one of his own, but is basically crapped on through out the first part of the story. It makes me surprised he’s not subtly trying something of his own just to get one over on his brothers and as for Pestilence? Boy, that guy is definitely a little on the nutty side and his little friend doesn’t help things either! Which makes me curious how Pestilence came across that little friend and that story is probably a doozy! War, I don’t have much to say about as he’s not really super present like the other three are in my view. Though his later issue with Death (who is an all out ass, let’s be real here) after the Reaper does something he shouldn’t have done does put him at center stage for a bit there. Now, you have these factions (Lucifer included to an extent) who each want something and quite frankly, said somethings involve a lot of bloodshed since apparently the concept of sitting down and talking things out just doesn’t seem to be a consideration in anyone’s heads. 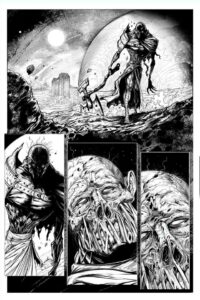 And that makes me think of some dialogue where a character believes God’s wanting them to learn from their mistakes instead of getting directedly involved Himself. Which… I’m not too sure if that’s actually the case here given a certain scene later in the story but I could be wrong. And you really have to feel sorry for Earth in this story, its seen as a prison by a number of the characters and like Famine, gets a lot of terrible treatment as the story goes on. Whether or not it’ll survive entirely by the time this story concludes in the end is anyone’s guess! And in regards to the 4 Horsemen, I’m curious as to why none of the other factions seem to really know who they are. Though it does seem to be hinted at in regards to their being the first of God’s 1st generation creations so that could play into why Gabriel and the others aren’t familiar with them, especially considering the 4 were imprisoned on the Moon. But for all I know, that’s some misdirection on War’s part to try and mess with Gabriel’s head.

Even though this is the first arc in the story, the over all summary and the events seen played out don’t really seem to connect together. Yes, there are mentions of the Armageddon and its needing to be concluded but we don’t see much of the Sage who involved himself in stopping Progression. Is the Sage God? Or is the Sage someone we haven’t met yet? Something I look forward to finding out about in the second arc whenever the time comes. And… Does Armageddon necessarily have to be concluded? Or would failure to do so bring about something much worse since its evidently always happened up until this point? More things things to hopefully learn more of in the future!

Editor’s Note: Interested in checking this out for yourself? Then head to the C3Comics website! Alternatively, you can also visit their store at Indy Planet as well!

Summary: Every new cycle begins with the destruction of the last.  For countless millennium, this has been the recognized order of events.  And even though it was a struggle amongst Gods for ultimate dominion, there were still rules that needed to be abide.  This struggle, these rules…is called The Armageddon.

Yet, this time around, those very rules were ignored.  There was the introduction of chaos into what used to be order.  And because of this a Sage did something that had never been done before, he interjected himself into Armageddon.  And unbeknown to him, because of his actions, Armageddon did not conclude, it was just delayed.

This story shows the consequences of his actions.